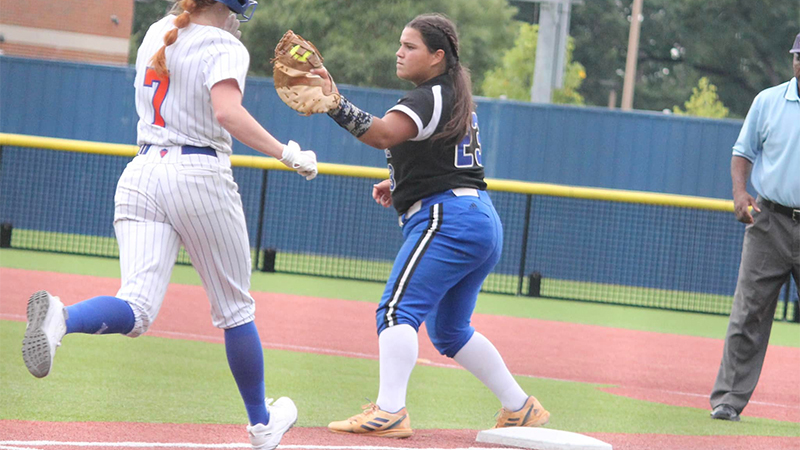 In a game full of momentum swings, the LaGrange softball team came out on top versus old region rivals Columbus 3-2 on Monday night.

“I think we are right at the threshold of where we want to be as a collective team,” LaGrange head coach Craig Mobley said.

The Grangers were able to jump out to a quick lead when Kimberly Reynolds stole home in the top of the first inning. LaGrange was not done there as the team added an additional run in the second inning on a Shelby Siggers RBI single to right field.

Columbus loaded the bases in the bottom of the second inning, but starting pitcher Zoe Thompson was able to get out of a jam.

Thompson went the full seven innings and limited the Blue Devils offense to just seven hits on no earned runs and three strikeouts.

“She absolutely dealt,” Mobley said. “She did a really good job on the mound and kept the Columbus batters off balance.”

The game was locked in a stalemate until the Grangers scored another run in the top of the sixth inning. With two outs, Carolyne Garcia reached first on an error as Hudson Wood scored in what proved to be the winning run of the game.

With two outs in the bottom of the sixth inning, an error by the Grangers allowed the Blue Devils to get runners on second and third. Back-to-back singles would drive in both those runs to make it 3-2, but Thompson was able to get a strikeout to slam the door on the Blue Devils’ attempt to tie the game.

“We have to capitalize better in our at bats and have a better approach at the plate for sure,” Mobley said.

Wood was the only Granger to reach base more than once in the game as she went 1-for-2 with a walk and a run scored. Siggers got the only RBI while going 1-for-3. McKinsey Gaddy and Reynolds both went 1-for-3 with a run scored. Tatum Nation and Abby McGill each got a hit in the game to round out the offense for the Grangers.

“We had a lot of weak contact in our early at-bats,” Mobley said. “One inning we only saw four pitches and then we were out of the inning because we were over-aggressive.”

The Grangers gave the Blue Devils their first loss in the opening four games of the season for Columbus.

LaGrange improves to 5-3 overall and maintains the 1-0 region record. The Grangers will travel to another old region foe in Shaw on Wednesday before getting back to region play on Thursday at Trinity Christian.

“We are going to take it one game at a time and what we learned from this one we’ll add to the tool bag,” Mobley said.