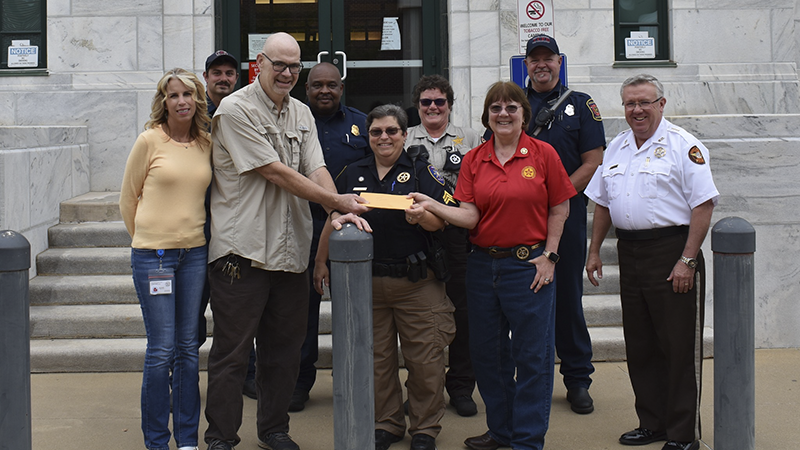 Troup County sheriff’s deputies rallied to support one of their own who is currently out of work while recovering from a medical issue.

Sheriff’s deputies held a benefit barbecue on Aug. 12 at the sheriff’s office to help support a longtime Troup County sheriff’s deputy and his family as he is recovers from heart surgery.

Deputy Matt Lindsey had quadruple bypass surgery on Aug. 5 and has been out of work for nearly two months after suffering a heart attack on June 17. In order to support their fellow deputy when Lindsey’s saved up sick leave began to dry up, his coworkers got the idea to hold a barbecue fundraiser to help support him and his wife with financial struggles resulting from being out of work and medical bills.

The barbecue was organized by Deputy Shelly Downs, who helped present Matt and Lisa with a check for the proceeds from the barbecue in front of the juvenile courthouse last week.

The event raised $4,000 for the couple. Downs advised that they sold about 200 barbecue plates during the fundraiser to go along with numerous donations.

Lindsey has worked primary with Troup County Juvenile Court in recent years serving notices on behalf of the court.

Lindsey said he was overwhelmed with the support he received from his fellow deputies and others.

“You never know how many people know you and care about you until something like this happens,” Lindsey said. “I never expected this.”

After the heart attack, Lindsey went through several smaller surgeries before ultimately needing to have the major bypass surgery at Wellstar Kennestone Hospital in Marietta.

Lindsey’s said his faith is also helping him get through this difficult time.

“The storm really hit me when I was in the hospital getting ready for surgery,” he said, realizing he was going to be out of work for some time and the possibility that he might not make it. “But if Jesus can calm the storm when he walked out to the boat with the disciples, he can certainly take care of me.”

Lindsey is up and about after the surgery, but he is taking it slow as he recovers. It’s going to be some time before he is healthy enough to return to his duties with the sheriff’s office. He hopes to be back to work by November.