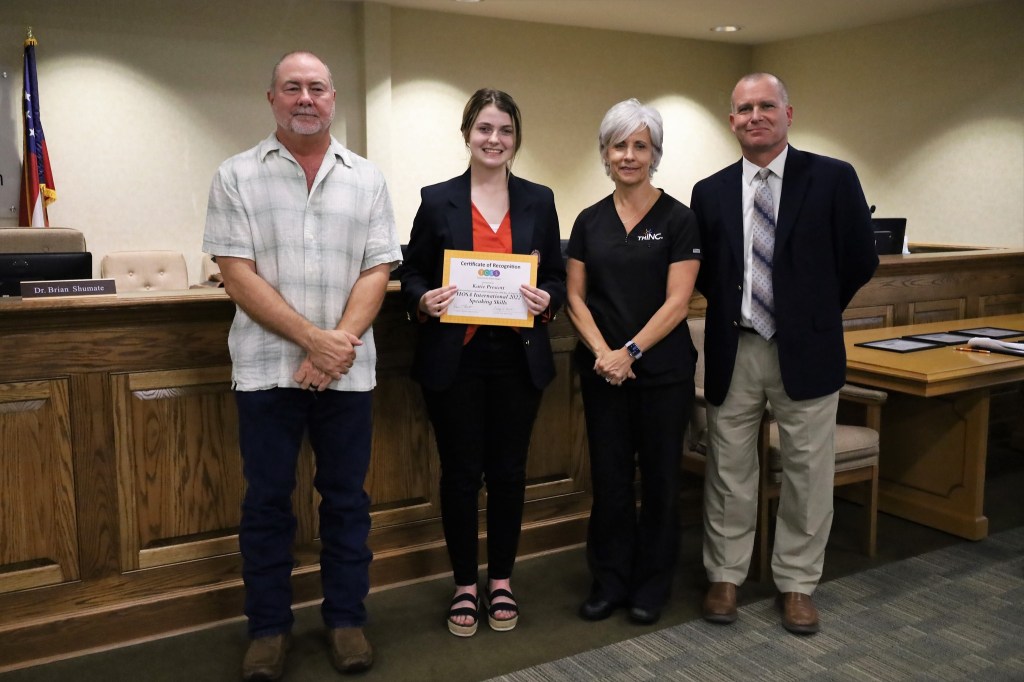 When she was 4-years-old and started at Hillcrest Elementary, Katie Prescott could only say one word — Katie.

Through a lot of work, Prescott overcame her speech impairment and just placed fourth in an international competition for speaking skills.

This past summer Prescott was one of several THINC College and Career Academy students who attended the Health Occupations Students of America (HOSA) International Leadership conference.

HOSA is a global student-led organization recognized by the U.S. Department of Education and the Department of Health and Human Services and several federal and state agencies. HOSA’s mission is to empower HOSA-Future Health Professionals to become leaders in the global health community, through education, collaboration and experience.

Prescott, who participated in the HOSA competition, advanced to the international competition, where she placed fourth in speaking skills.

In many ways, it showed how far she’s come in her years at the Troup County School System.

“I couldn’t speak like other the kids,” Prescott said of her speech impairment. “They held me back in kindergarten and put me in speech because they felt that was going to be good for me. If they didn’t make that decision, and just passed me on, I wouldn’t be showing with my speaking right now.”

Presently, Prescott is a senior at THINC Academy.

Through her ingenuity and determination, Prescott found a love for speech, a subject she originally thought she would hate.

“I thought it was stupid at first and thought it was not going to be fun,” she said. “But when I joined and started participating in it, I was wrong because HOSA is a big part of my life now.”

Before she decided to compete, Prescott asked her teachers to suggest a good subject to compete in. Her teachers suggested for her to compete in speaking skills. Initially, Prescott didn’t know what to write about but then thought about her story and became inspired. She told her idea to her teachers, who then helped her write her speech.

“Katie worked on her speech all winter and spring to be ready for our Georgia HOSA State Leadership Conference,” THINC Healthcare Science Instructor, Jayne Pauley said.  “She spent extra time this summer, prior to our trip to ILC in Nashville, practicing with me and a couple of other students here at THINC. She spent many days practicing in front of groups of three at home, as well, in order to be prepared to speak in front of the judges.”

In her speech, Prescott spoke about her speech impairment and the work she put in to better herself, personally and academically. She talked about her time in speech therapy, where she would practice flash cards and participate in vocal warm ups.

“I never thought people would be interested in my story, but after I finished my competition, and found out I placed fourth in my competition, it was a big deal for me,” Prescott said. “I wanted to share my story because I am very proud of it.”

Prescott said she plans to continue competing in speech competitions locally and internationally.