Callaway heads to Cedartown for a tough matchup on Friday 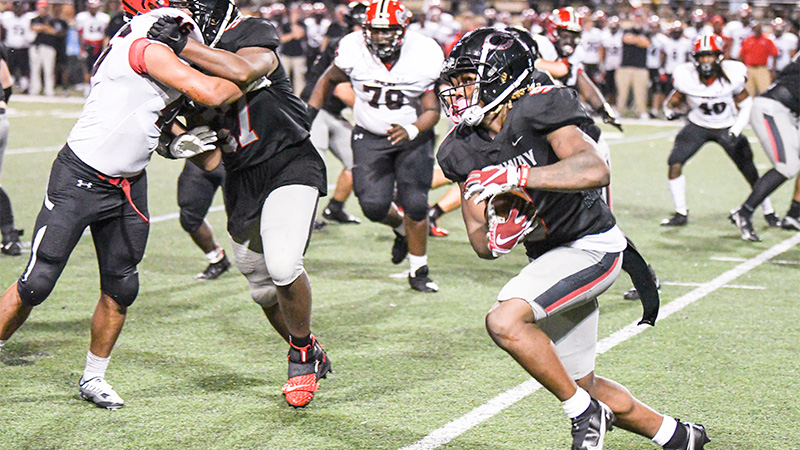 Callaway is reeling from a tough 29-28 loss against Opelika in their opener but is ready to get back to work this week with a game against Cedartown on Friday.

“Cedartown is a good football team,” Callaway head coach Pete Wiggins said. “They are physical, they are well coached, and they have a lot of tradition.”

The Cavaliers took part in an instant classic against AAAAAAA Opelika last Friday that could have gone either way. Callaway took a 28-21 lead with 5:47 left in the game when Quay Whitfield carried it in from two yards out to cap the drive. Opelika answered with a touchdown drive and two point conversion to take the lead late. Callaway’s offense stalled as the Cavaliers season started with a loss.

“We had a good practice yesterday, and we had meetings on Sunday,” Wiggin said. “Our kid’s attitudes were good, and they know we lost to a good football team.”

Despite the loss, there were plenty of positives to take away from that game. Sophomore Bryceton Sanders caught a 75-yard bomb on the second play of the game. Sanders emergence as a quality wide receiver would be a big boon for the Cavaliers offense as he will continue to develop during his time at Callaway. Jordan King and Whitfield ran the ball hard for the Cavaliers in week one. King scored two touchdowns while Whitfield punched in the final score of the game for Callaway.

“Jordan King ran the ball real hard,” Wiggins said. “Quay Whitfield also brought it in the backfield. I thought those guys were physical, and I’m really proud of their efforts.”

There were some standout performances defensively as Fred Tigner took it to the Opelika offensive line all game.

“I think he had one of his best games ever for us,” Wiggins said.

AAAA Cedartown is heading into its game with the Cavaliers at 1-0. The Bulldogs earned a tough 27-14 win over Rockmart in their opening game last week. Cedartown never trailed in the game. The Bulldogs are another elite team that the Cavaliers will be facing. Cedartown made it all the way to the AAAA state semifinals last season where they narrowly lost to Carver 22-21.

“We are going to have to play at a very high level because Cedartown has a great football team,” Wiggins said. “They are big, physical and I know they have high expectations.”

This will be the second straight week that Callaway has played a team in a much higher classification than its AA status, and this will continue next week with a game versus Troup. These opening three weeks will challenge the Cavaliers depth as they play teams that have a much deeper talent pool to call on.

“We want to play good people that will prepare us for down the road, but it’s a huge test,” Wiggins said. “We played a top 10 AAAAAAA school (from Alabama), and then we have to turn around and play Cedartown who are a top three team in AAAA.”

Callaway is not afraid of any challenge, which has made them into one of the top teams in AA over the last decade.

The Cavaliers enter week two 0-1 and will look to get into the win column for the first time this season with a trip to Cedartown on Friday.