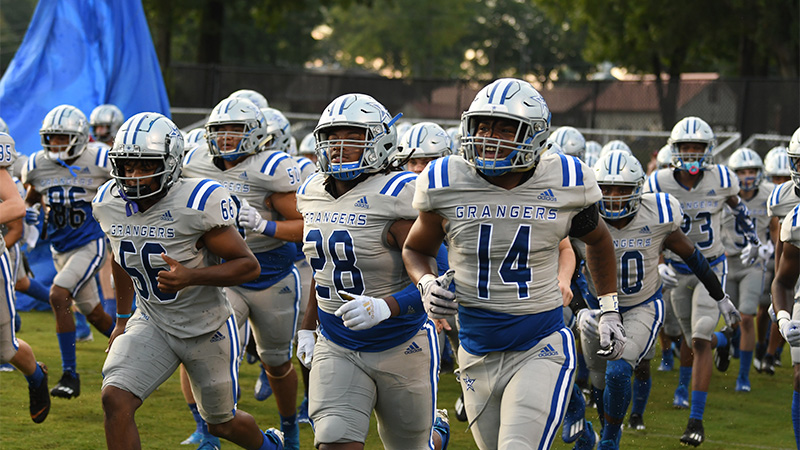 LaGrange is set for a date with Northside (Columbus) on Friday at Callaway Stadium. This will be the first game the Grangers play at home this season after a scrimmage at Harris County two weeks ago and a trip to Smiths Station last Friday.

“The LaGrange faithful are second to none,” LaGrange head coach Matt Napier said. “It’s an atmosphere most people envy.”

People will be envious of the team that takes the field on Friday as well. The Grangers took it to Smiths Station in week one as they came out on top with a 49-20 victory.

Malachi Render-Fannin was the star of the show as he lit up Smiths Station with seven rushes, 200 yards and two touchdowns. Fannin had rushing touchdowns of 75 and 17 yards and rattled off a big 67 yard run to set up a touchdown as well. AJ Tucker joined Render-Fannin in dominating the Smiths Station defense on the ground. Tucker finished the game with seven rushes 101 yards and two touchdowns. Tucker had an 11-yard touchdown run, but it was his 58 yard touchdown run as time expired in the first half that sent Grangers into the break with some momentum and a 21-13 lead.

While the running backs were dominant, they would not have been able to put up those gaudy numbers without the offensive line.

“Kelijah Parks is an offensive lineman that had a phenomenal game,” Napier said. “He had four big blocks for us.”

Magic Johnson was the team’s leading receiver in the game with three catches for 22 yards and showed some pop in the return game as well.

The Granger offense was rolling all night as they ran 37 plays for 380 yards. The defense showed out as they limited Smiths Station to 190 yards on 56 plays. The Grangers defense forced two turnovers and had five sacks. LaGrange only let up one touchdown in garbage time in the second half.

“I thought our middle linebackers, JD McCutcheon and JT Burks, played really well,” Napier said. “I was really pleased with how they ran to the ball.”

Northside and LaGrange have locked horns before under Napier. In his inaugural season (2020), the Grangers were able to escape with a 35-28 overtime win.

Northside finished 2021 with a record of 4-5 in AAAAA and missed the playoffs.

Both teams enter week two 1-0. LaGrange will host Northside on Friday with kickoff scheduled for 7:30 p.m.

“We have our hands full,” Napier said. “They are well coached, and they have good players so we are excited about the challenge.”