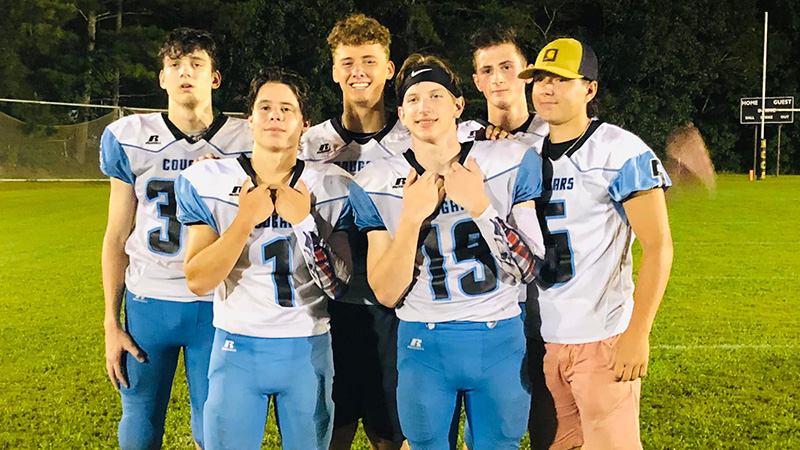 LaFayette Christian School is heading into week two against Holy Ground with some momentum as the Cougars trounced New Creation 38-8.

The Cougars have faced Holy Ground in previous seasons and look forward to locking horns once again on Friday night.

“In the past, we’ve been pretty competitive with them. We’ve won the last couple of years,” LCS head coach Jared Pike said. “They are a physical team and a big team so it will be tough, and we’ll have to play well to get the win.”

This will be Holy Ground’s first game of the season as the team did not have a game scheduled for week one. While Holy Ground might have to knock some rust, the Cougars will be riding into the game with some momentum.

“He really hit the weight room this summer,” Pike said. “He rolled his ankle last year, and it lingered so he strengthened up his ankles this year.”

Snyder was not the only Cougar who impressed in week one. Starting quarterback Andrew Hough threw for 150 yards and a touchdown in just three quarters as he got some rest in the fourth with the game out of reach for New Creation.

Defensively, it was Alex Tusing who led the way. The captain of the defense also made a huge special teams play with an onside kick recovery with the game in the balance in the first half. Cal Evert led the team in tackles from his defensive end spot and chipped in a massive sack to end a New Creation drive at the end of the first half.

The Cougars had to play some freshmen on both sides of the ball, and they impressed in their first game at the high school level.

“Brandon Davenport started at linebacker and looked good,” Pike said. “Our whole offensive line are freshmen. They’ve been working hard, and there were some times they were a bit nervous.”

While the scoreboard was impressive, it was not all positives in the first game out for the Cougars.

“We have to clean up the penalties,” Pike said. “We had some false starts and holding calls that ruined a couple of drives.”

This will be the first home game of the season at home for LCS where the home crowd should provide a lift.

“It’s great to bring the fans out,” Pike said. “We actually traveled pretty well last week. The best part is we don’t have to make a two hour drive through Atlanta.”

While the Cougars were able to escape week one’s game with no major injuries, LCS suffered a setback with Paul Batastini injuring himself away from the team. As one of the team’s starting cornerbacks and the back-up quarterback, Batastini’s shoes will be hard to fill as a freshman will likely have to fill in for however long Batastini is out.

LCS enters week two 1-0. The Cougars will be at home against Holy Ground on Friday with a 7:30 p.m scheduled kickoff time.

“I think we have some momentum we can carry over,” Pike said. “We got the first win of the season and some of the jitters out already.”