Troup gets ready to renew rivalry with Hardaway 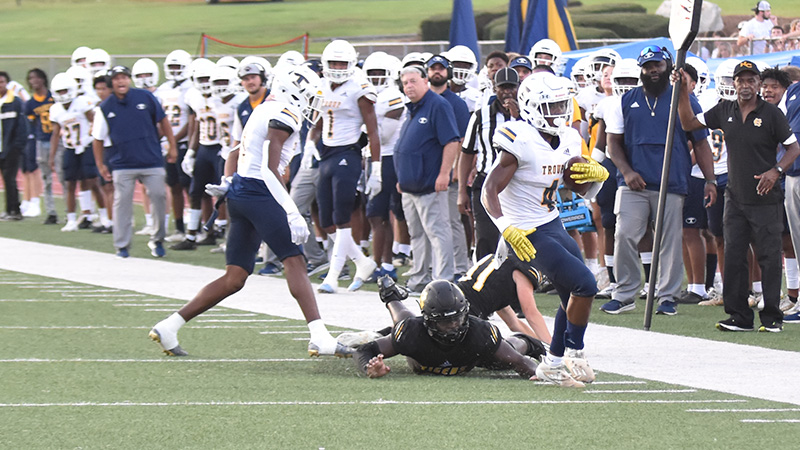 Troup will be back in action on Thursday after a shortened week of preparation for its game against old region foe Hardaway. After a dominant performance against Harris County last Friday, expectations will be high for the Tigers heading into their second game of the season.

“Hardaway is one of those teams that matchup wise play us really tough,” Troup head coach Tanner Glisson said. “When you’ve been around the block as many times as we have, there are some teams we match up well against and some that we don’t.”

The Tigers are 2-2 in their last four meetings with Hardaway, all since 2016. All four games were decided by a single score including last year’s contest that proved to be an instant classic as the Tigers held on for a 41-34 win in overtime. Troup trailed 28-3 after the first quarter and pulled a rally for the ages over the final three quarters and overtime. This win helped propel the Tigers to a second seed in the playoffs while Hardaway had to settle for a fourth seed. Hardaway lost to Perry in the first round 31-12.

The Hawks are also prepping for their second game of the season, but unlike Troup, they are coming off a tough loss. Hardaway fell to 2021 AAAA state runner-ups Carver 41-10 last week. The Hawks will be hungry for their first win of the season at Callaway Stadium on Thursday.

“They are typically really physical,” Glisson said. “We expect nothing less from them on Thursday night.”

Troup is coming off a dominant 33-0 win over Harris County last week. Starting quarterback Taeo Todd proved untouchable versus Harris County. Todd carved the defense up with his legs in tune to 166 yards and three rushing touchdowns on just eight carries. He was also able to work the defense through the air with a 5/10 43 yard and one passing touchdown performance. Todd accumulated these gaudy stats in just the first half of the game as he was given a rest in the second half.

No other rusher had more than three carries as the Tigers spread the rock around in the running game. Noah Dixon did take his lone carry for 28 yards.

Qua Moss led the receiving core with two receptions for 23 yards and a touchdown. Moss also had a crucial interception in the first half to keep Harris County out of the end zone.

The Tigers will enter game two with a mostly clean bill of slate with no major injuries to contend with.

Troup heads into week two 1-0. The game on Thursday against Hardaway is scheduled to kickoff at 7 p.m.