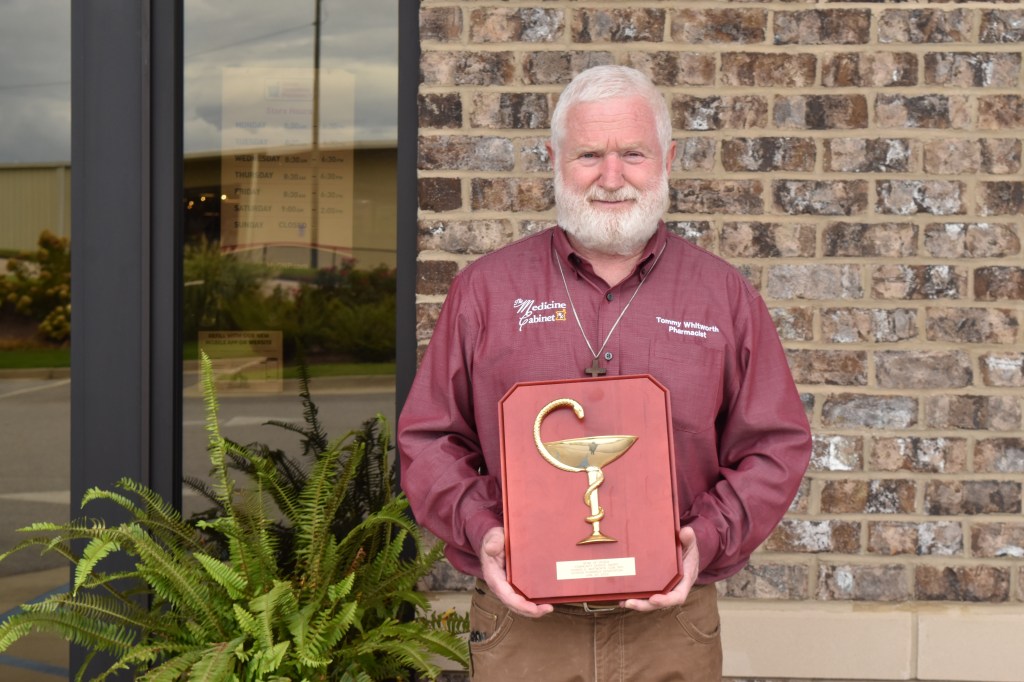 This summer local pharmacist, Tommy Whitworth of the Medicine Cabinet, won the coveted Bowl of Hygeia.

The Bowl of Hygeia is an award that is presented annually to one pharmacist in each state. The pharmacist in the state that receives this award is recognized for their work and exemplary community service. Historically, recipients of this awards are noted to go above and beyond filling prescriptions, helping customers and running a drugstore.

According to Whitworth, the Bowl of Hygeia is sponsored by the American Pharmaceutical Association and has been presented to deserving pharmacists for many years.

“It was a great honor to have that presented to me,” Whitworth said. “Usually the ones that win it had been at this game for a while, and it is the most prestigious award I’ve ever had. It was really special.”

Whitworth was born and raised in LaGrange where he practiced pharmacy for almost 37 years.

He practiced pharmacy previously in the Valley, Alabama.

“This award is basically for being a community servant,” he said. “Just embedding yourself and to the community and any and all endeavors and so forth that make the community better.”

Upon hearing his name called as this year’s Bowl of Hygeia winner, Whitworth said he didn’t feel like he deserved it.

“When they first told me, I thought I didn’t deserve it because there are many other people like me doing pharmaceutical work, but I was very appreciative of it,” Whitworth said.

According to Whitworth, the Bowl is Hygeia is only voted by pharmacists in Georgia that are previous winners of the award.

“People can get nominated by anybody but then they have a meeting with about 15 or 20 previous recipients and screen out the nominations,” Whitworth said. “A lot of my good friends are on that committee and it was great to be honored by such good people.”

After 42 years of practicing in pharmacy, it’s a nice touch, he said

“Sometimes you look and say, ‘Where did the years go?’ Then you look at it and say, ‘God, it’s been a long run,’ but I’ve been fortunate to live in LaGrange,” Whitworth said.