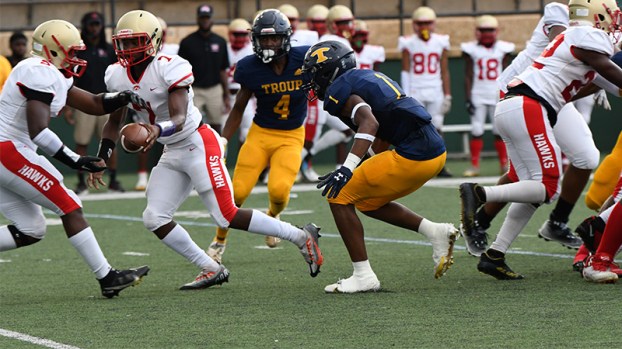 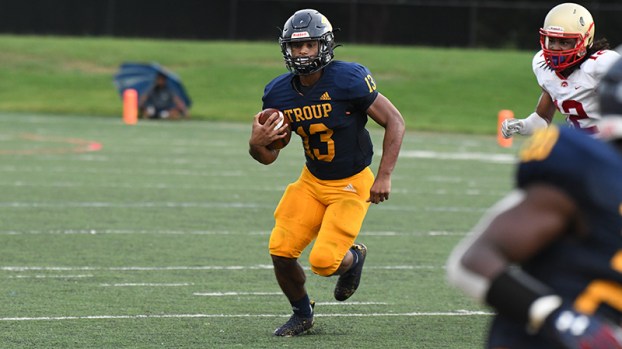 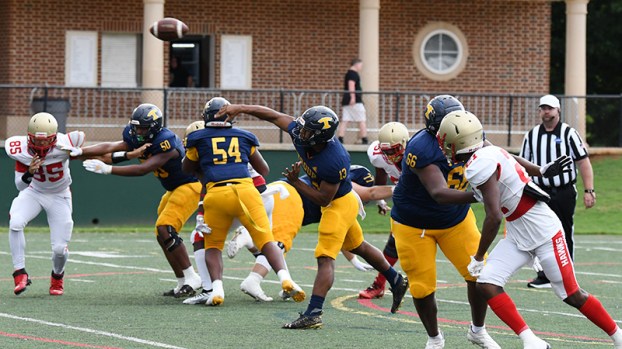 Todd finished the game 13/18 passing for 300 yards and two passing touchdowns to go along with 17 carries for 205 yards and five touchdowns on the ground.

The Hawks won the coin toss and deferred which was the only win for Hardaway on the evening. The first offensive play served as an omen to come as Todd hit a streaking Qua Moss over the middle for an 80 yard touchdown catch. The Tigers did not look back from there as they pounced on the Hawks early.

“We started off the game playing really fast,” Troup head coach Tanner Glisson said. “Hardaway is a physical football team, and we were able to play fast in the first half.”

A quick three and out from the Hawks gave the ball back to Troup, who put together a 74 yard touchdown drive capped off by Todd punching it in from eight yards out.

The Tigers forced another punt and once again it was the Taeo show as he scored a rushing touchdown from 67 yards out.

Hardaway took the ensuing kickoff to Troup’s 15-yard line and then punched the ball in to make it 22-7. This would not be the only time the kicking game would come back to bite the Tigers on the night.

The Tigers scored a touchdown on their fourth straight possession to open the game following the Hawks touchdown. Todd hit Moss again for a 38-yard gain to get the Tigers deep out of their side of the field. Moss led the Tigers receiving core with three catches for 142 yards and a touchdown.

A couple plays later it was Todd throwing a deep touchdown to junior Logan Sinkfield who caught it over two defenders then made a couple miss to reach the end zone from 51 yards out.

“I would say I definitely Moss’d him,” Sinkfield said with a smile. “We practice that everyday. I went up and got it.”

Sinkfield also made a devilishly good 39-yard catch in the fourth quarter where he once again displayed great ability to high point the football.

“He did an awesome job tonight,” Todd said. “It’s special playing with him.”

Sinkfield also got some time on the final drive of the game at quarterback.

Sinkfield transferred to Troup and this is his first season with the Tigers. He had a single catch for -2 yards in week one before putting up two catches for 90 yards and a touchdown against the Hawks

“He’s the newcomer of the year so far,” Glisson said. “He’s been explosive and is a great kid. He practices hard, goes to class and makes good grades. It can’t happen to a better kid.”

After the touchdown catch by Sinkfield, the Hawks took the kickoff to the house.

“I think that was a lot to do with being tired. We had guys loafing down and next thing you know they are at the 40 or 50 yard line,” Glisson said. “We’ve got to do a better job of that and maybe look to get some more depth on the kickoff team.”

Todd connected with Moss for 31 yards on the ensuing possession for the Tigers, but threw his first interception of the game to stall out the drive. CJ Sands had his teammates back though as he intercepted a pass from the Hawks to set up the Tigers in plus territory. Troup drove down the short field and Todd ran into the end zone to score his fifth touchdown of the game and send the Tigers to the break up 36-14.

The third quarter was a bit of a stalemate until the Hawks scored a touchdown to make it 36-21 Tigers.

Todd had a 60-yard rushing touchdown (his fourth touchdown of the game of 50+ yards) late in the third quarter and an eight yard touchdown run in the fourth quarter to ice the game.

“It felt good being back at home and getting a win in front of all the fans,” Todd said.

Defensively the Tigers were led by junior Qua Birdsong who has made a living in opponents backfield through two weeks. Birdsong had a whopping seven tackles for a loss – more than the rest of the team combined.

“He’s a great player,” Glisson said. “He’s so explosive and he’s a really good football player. He plays with a good mentality and practices with that same mentality. I’m glad he’s on our team.

The only injury note to take out of the game was sophomore Jayland Reed (defensive back) who was shaken up on what appeared to be an illegal blind side block that went uncalled. Reed is in concussion protocol and could miss the next game out for the Tigers.

“It’s very unfortunate,” Glisson said. “The referees are doing the best they can, but it was a pretty obvious blindside block. It gets you frustrated because you know the kid is going to miss tonight and maybe some more time.”

Troup improves to 2-0 on the season. The Tigers will be back in action on Sept. 2 against Callaway.

“There were times when we played really well and times where we didn’t look quite as good,” Glisson said. “We have to be more consistent in some areas.”