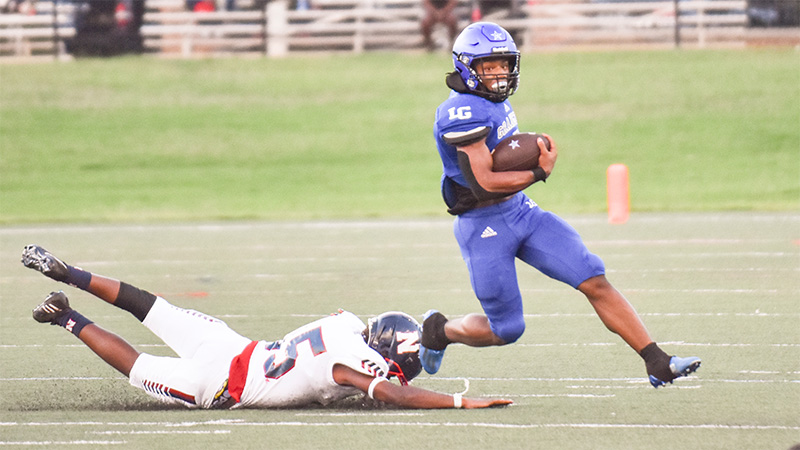 Malachi Fannin-Render was at it again on Friday night. LaGrange (2-0) ended up winning the game 56-28, but it was his 89-yard touchdown run with the game tied at 28 late in the third quarter that dropped draws and broke Northside hearts.

“I just saw green grass in front of me,” Fannin-Render said. “[The spin move] is something I’ve been working on in practice.”

He sent a player flying with a stutter step and then another with a spin move. He slipped out of another tackle as he streaked up the left sideline as the Granger faithful went crazy. The Grangers tacked on three touchdowns in the fourth quarter to make the score a bit more flattering, but it was the Fanin-Render run that had Callaway Stadium all shook up.

“Malachi is explosive, but the best thing about him is he’s selfless. He wants his teammates to succeed too,” LaGrange head coach Matt Napier said.

The first three quarters were a back and forth affair with LaGrange taking a quick 7-0 lead. The Patriots answered with a field goal and then turned a Granger fumble into seven points to take a 10-7 lead. Northside took a double-digit lead with a touchdown with 8:57 left to go in the first half.

“They came in and had a good game plan,” Napier said. “We were out of sorts early.”

With their backs against the wall, the Grangers responded. LaGrange marched 75 yards down the field on the ensuing possession, and Jaylan Brown capped it off with an 11-yard touchdown run.

The Grangers forced a three-and-out on defense and once again took the ball and ran it down the Patriots throat with Fannin-Render scoring from 30 yards out to make it 21-17 Grangers.

Northside was able to take its next possession down for a field goal to make it 21-20 just before half.

Two deep passes from Brown to Magic Johnson set the Grangers up at the Patriots 12-yard line with under a minute to go, but the offense stalled out. A silly personal foul backed up the Grangers as they had to attempt a 41-yard field goal that sailed wide.

Northside tied the game at 28 after a fumble by AJ Tucker, but the second half of the game was the Parker Shattuck show. He had two tackles for a loss and a sack on the Patriots second possession to start the half, but he was not done there.

“Wow, what an impact he had on the game,” Napier said. “He was big in those crucial moments of the game.”

The Patriots punted on that possession, which pinned the Grangers on their own 11 yard line. Fannin-Render unleashed his 89 yard touchdown run on the first play of the drive — his third touchdown run of the game.

Fannin-Render is special, but the offensive line was moving the defenders and opening lanes for him and Tucker all night.

“Those guys upfront did a great job tonight,” Napier said. “Those guys don’t get all the newspaper pictures and the headlines, but we have a good veteran group.”

The Grangers took a 35-28 lead to the fourth quarter and thought they extended it on a 50-yard touchdown run by Tucker, but it was called back for holding.

Northside got the ball back with a chance to score a touchdown to tie the game. On third and long, Shattuck blew through the offensive line to hit the quarterback as he was throwing. JT Burks intercepted the duck of a pass and returned inside the 10 yard line.

“It was fun,” Shattuck said. “I have not played defense in a while. It felt good to get back out there and hit people.”

Tucker scored on the Grangers’ possession to essentially ice the game by making it 42-28.

Johnson blew by the defense late in the fourth for a 50-plus yard touchdown reception to extend the Grangers lead to 49-28. With under a minute to go, it was Shattuck in the Patriots backfield causing havoc once again as he hit the quarterback when he was throwing, which resulted in an interception by JD McCutcheon that he took over 70 yards to the house to make it 56-28.

“They were running a lot of speed sweeps and RPO’s in the first half,” Shattuck said. “We made some adjustments at halftime, and they worked.”

LaGrange improves to 2-0 on the season. The Grangers will have a bye week next week before returning to action at Callaway Stadium on Sep. 8.