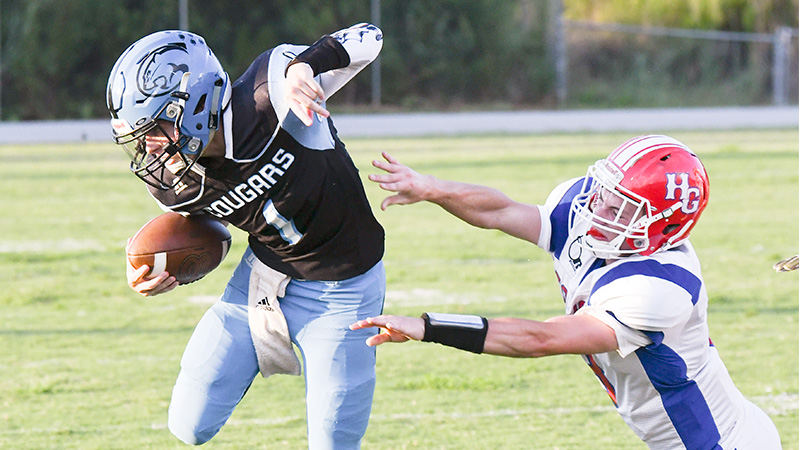 A great football game — one that at times looked more like a track race — as the Cougars defeated Holy Ground 52-32 win, but it was anything but comfortable.

Snyder ended up totaling 30 rushes for 145 yards in the game as the Cougars rode their starting tailback to victory.

Over the next minute of game time, Holy Ground scored on a 60 yard run to make it 14-8 Holy ground, and the Cougar answered with a 67 yard touchdown pass to Chaz Clark to tie the game at 14. In just under four minutes of game time, four total touchdowns were scored as the momentum swung back and forth.

“I was just trying to put out fires,” Pike said.

Holy Ground cut the Cougar lead to eight in the second quarter before Snyder answered with a 42 yard rushing touchdown to make it  36-20 Cougars.

Holy Ground answered with two touchdowns to make it 26-32 with 3:09 left in the first half. Snyder answered the bell once again for the Cougars with a 25-yard touchdown run and a two point conversion. Hough scored the first touchdown in the second half on a 5-yard run to give the Cougars a 52-32 lead.

Cal Evert made a sack on each of the next two Holy Ground drives to keep the Cougar lead intact. The Cougars defense actually pitched a shutout in the second half after letting up 32 points in the first half.

“There were some players in the first half not sticking to their responsibilities,” Pike said. “At halftime, we kind of settled down.”

There were some negatives to take from this game as well as one of the best players for the Cougars — senior Alex Tusing — got ejected from the game along with a Holy Ground player.

Because it was a non-region game, it is unclear if Tusing will have to miss the next game.  LCS heads into a bye week with a spotless 2-0 record. The Cougars will be back on the road against Praise Academy on Sep. 9.

“I’m proud of the way we played, but we had a couple of personal fouls after the whistle that were unacceptable,” Pike said.