Athlete of the Week: Malachi Fannin-Render has been the breakout player in the area 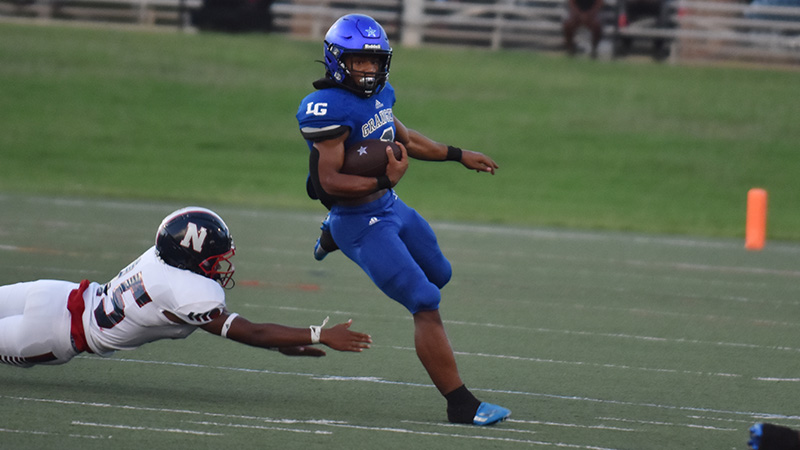 The breakout football player of the fall so far, Malachi Fannin-Render, earned athlete of the week honors after a dominant game against the Hardaway Hawks on Friday night.

The sophomore had a spot in the rotation last year but has transformed himself into must see TV this season every time he laces on his cleats and hits the gridiron.

“I’ve been in the gym getting bigger and stronger,” Render-Fannin said. “I feel faster too.”

Fannin-Render lit up the Hawks with 16 carries for 250 yards and three touchdowns. This was just the cherry on top of the sundae as he also exploded in tune to seven carries for 200 yards and two touchdowns in LaGrange’s win over Smiths Station in week one.

His ability to make people miss in space has been a massive boon for the Granger offense. Take his 89-yard touchdown run against Hardaway for example. With the game tied at 28 all late in the third quarter, Fannin-Render put on a man on skate near the line of scrimmage before hitting a spin move on another and zoomed up field for the longest touchdown of the young season for LaGrange.

“That kid is special, there is no other way around it,” LaGrange head coach Matt Napier said. “I’ve coached a bunch of good tailbacks through my years. I’ve had guys rush for 2,000 yards. I’ve had guys play Division I football. Malachi is that type of player.”

Fannin-Render has been turning heads with his play through two games, but he started making an impression on his coach long before week one of the 2022 season.

“He had a tremendous offseason,” Napier said. “The work he put in is paying off.”

Fannin-Render has exploded out of the blocks to start his second campaign as a Granger, and there is no sign of him slowing down. Through two weeks, he has accumulated 23 carries for 450 yards and five touchdowns.

Now, he gets a week off before hitting the field for the Grangers when they take on Upson-Lee on Sep. 8 at Callaway Stadium.