Troup and Callaway get ready for another clash on Friday 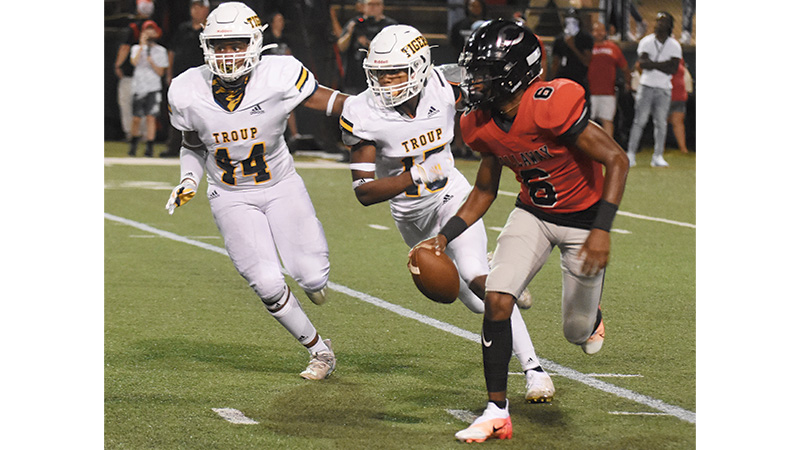 The only high school football game in the county this week is one of the biggest of the year as Troup Tigers and Callaway Cavaliers renew their rivalry.

The teams meet on Friday with Callaway as the home team, but the turf will be just as familiar to the Tigers.

Troup comes into the game riding two straight victories to start the season while the Cavaliers have suffered two straight losses.

“It’s probably the worst thing that could have happened to us, the fact that they probably feel like their back is against the wall,” Troup head coach Tanner Glisson said. “Usually good programs like Callaway will come out and play well the next time around.”

Callaway is looking to rebound after a tough 47-7 loss to Cedartown – one of the best teams in the state – last week.

“I’ve been proud of our guys,” Callaway head coach Pete Wiggins said. “We are practicing hard and we’ve been continuing to work hard in the weight room. Even though we’ve faced adversity through the first two ball games our attitude has been really good.”

The Cavaliers will be looking to bring some attitude to Callaway Stadium again on Friday like they did last year against Troup when they beat them 28-7. The teams will meet for the fifth straight year Friday with the Cavaliers having won three straight since Troup won 37-20 in 2018.

While the Cavaliers have won by 20+ points the last two meetings, Troup is a much improved side. According to Georgia High School Football Daily, the Tigers are the eighth best team in AAAA, according to their composite rankings.

“Anytime there’s a big game where two teams are close, it can turn into a rivalry,” Wiggins said. “That’s what that game has become.”

The annual matchup is no longer a burgeoning rivalry, it has become a full blown battle for the county.

“If you look back, they have had the upper hand the last few years,” Glisson said. “If you look at the games from 2018-21, there were a lot of explosive plays.”

Troup starting quarterback Taeo Todd was injured against Callaway last season and missed some important games last season. Todd has improved his game in the offseason and his profile has exploded through the first two weeks of the season. Todd has run for 371 yards and passed for 343 yards with 11 total touchdowns in six quarters of play this season.

“Troup has a very explosive player in Taeo Todd,” Wiggins said. “I think he’s one of the best players in the state.”

The Tigers offense revolves around Todd, but they bring a high-quality defense as well led by Qua Birdsong, who is one of the best junior pass rushers in the state.

“Birdsong does a great job and he pursues extremely well,” Wiggins said. “They also have good linebackers and are strong on the backend with Noah Dixon.”

While the Cavaliers did not have their best performance last week, there was evidence in week one that they are still one of the top teams in AA. DeShun Coleman and Bryceton Sanders, a sophomore wide receiver, have built a strong connection in the offseason and showed in week one with a 75 yard catch and run in the early stages of week one against Opelika. Quay Whitfield has been churning out yards on the ground and scored Callaway’s lone touchdown last week.

“They are extremely talented and are always a tough team,” Glisson said. “We are going to have to buckle our chin straps and get ready to play.”

Troup enters the game 2-0 with eyes on starting the season with a perfect 3-0 record heading into a bye week and then region play. On the flip side, the Cavaliers enter the game 0-2 and are searching for their first win of the season before taking on rivals Heard County next week.