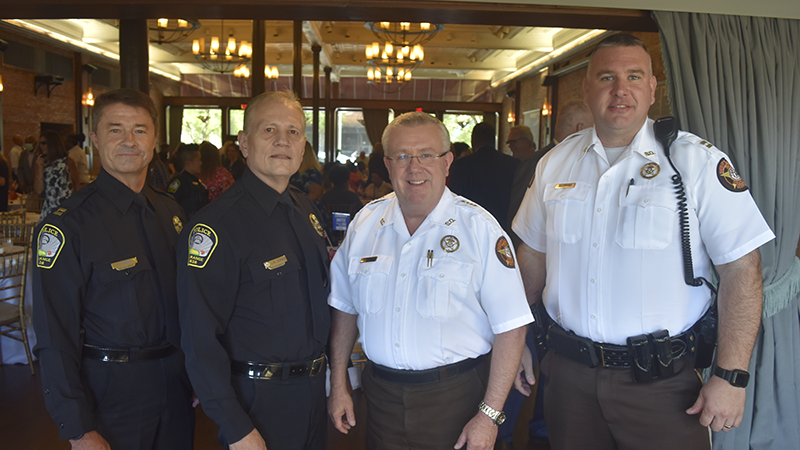 United Way of West Georgia, Inc. kicked off its 2022 fundraising campaign, United Stronger, on Wednesday with a luncheon at Del’avant in LaGrange. LaGrange Police Chief Lou Dekmar and Troup County Sheriff James Woodruff served as speakers for the event and their agencies will help oversee this year’s campaign.

“You may be thinking, what does law enforcement have to do with United Way?” Dekmar said.

Dekmar explained that these days he’s hesitant to define to what they do as simply law enforcement.

“I prefer ‘police services.’ That’s what it really is,” Dekmar said. “The bulk of police responses and citizen contacts have very little to do with crime, and everything to do with some form of social services which if not handled properly impact public safety.”

Dekmar said when resources and services are properly available, which United Way helps provide, other programs can intervene before police have to make an arrest.

“Our use of force and resisting arrest incidents are less than half of most police agencies because we have resources and options to intervene early before an arrest is necessary,” he said.

Locally, United Way helps provide those resources and services through its 23 partner agencies.

“United Way plays a critical role with those agencies that provide services to those in need and are brought to the attention of police,” he said.

“Sheriff Woodruff and I are here — united stronger— because we both know how critical those United Way agencies are to public safety,” Dekmar said.

“We are very fortunate in LaGrange and Troup County to have United Way. [Dekmar] and I work very closely because we fight the same battle every day. We face the same people every day, we face the same problems every day, and it’s easier for us to do it as a team than to do it individually,” Woodruff said. “That’s what we’re doing here today is to encourage you to be stronger united because everybody in this room can do a little bit, and if everybody is willing to do a little bit, LaGrange can be great.”

Both Dekmar and Woodruff specifically pointed to the services provided by the domestic violence shelter, Harmony House, as being crucial to their jobs. Harmony House is just one of 23 local agencies that United Way supports.

Woodruff and Dekmar have each called on one of their respective captains to co-chair this year’s United Way campaign, appropriately titled, “Stronger United.” Taylor, of the Troup County Sheriff’s Office, and Capt. Mile Pheil, of the LaGrange Police Department, will co-chair the campaign for 2022.

One of their first projects in the 2022 campaign will be the Second Annual Day of Caring, where United Way of West Georgia partner agencies collaborate with the City of LaGrange for community service work projects.

Taylor and Pheil started the volunteer community service day last year, with one of the projects helping the city clean up Calumet Park. This year they plan to host the event again sometime in mid-October, but the details on the service projects to be completed have not been finalized.

Taylor said they learned from last year and have pushed the event back a month, so that it’s not so hot. He said that volunteers can choose to work all day, a half day during the morning or afternoon, or even just one or two hours. A cookout lunch will also be provided by the sheriff’s office.

The local talent competition serves as the premier fundraiser for the non-profit each year where singers, musicians, comedians, dancers or basically anyone with talent compete to raise money for United Way partner agencies.

The program is accepting entries for the contest starting today through the end of September. Voting begins on Oct. 1 and will continue throughout the month. Once the votes are tallied, the top 10 will be announced, and they will perform on Nov. 17 at Callaway Auditorium at LaGrange College.

Phiel advised that what impresses him the most about United Way is that 99 cents out of every dollar raised goes to local partner agencies, not some national headquarters.