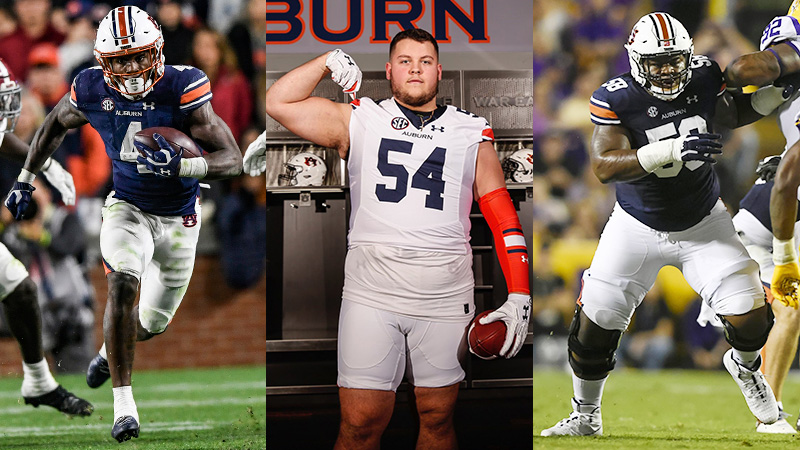 Callaway Cavalier fans may have to look at their TV twice Saturday when the Auburn Tigers’ offense takes the field.

For a minute, it’d be easy to think you were watching Cavalier game tape from a couple of seasons ago.

In a historic moment, three Callaway High graduates will start on offense for Auburn on Saturday, as running back Tank Bigsby and offensive linemen Keiondre Jones and Tate Johnson are all projected to start. The Tigers will play Mercer at 7 p.m.

Of the three, Bigsby is the known commodity nationally as he is considered one of the top running backs in the country. Jones and Johnson do not get the headlines as offensive lineman but will be tasked with opening up holes for Bigsby. All three have also made the SEC Academic Honor Roll.

Jones went into the season as a projected starter, while Johnson was expected to be the no. 2 center on the depth chart. With a season ending injury to sixth year senior and veteran leader Nick Brahms, Johnson seized his chance to become the Tigers starting center.

“He’s kept a positive outlook his whole career and kept grinding,” Callaway head coach Pete Wiggins said. “Now, he’s getting the chance to start at Auburn University in the SEC. How cool is that?”

Jones was the only Tiger offensive lineman to start every game in the 2021 season and was also  named to PFF College All-SEC 3rd team.

Jones will be the starting right guard when the Tigers take the field against Mercer on Saturday and his fellow Cavalier brethren Johnson will be lined up next to him at center.

Johnson had to grind his way to a starting position as he got a few reps against LSU during his freshman year, but he did not receive any playing time last season. He bided his time at Auburn instead of entering the transfer portal and worked his way up the depth chart and now gets his chance to start in front of over 80,000 Tiger fans on Saturday night.

“I’ve had Auburn coaches brag on him in terms of [Johnson’s] commitment to getting better,” Wiggins said.

Bigsby will be one of the main men the other two guys block for in 2022. Bisby toted the rock 223 times last year for 1099 yards and 10 touchdowns to go along with 21 receptions and 184 yards receiving. Both Pro Football Focus and Sports Illustrated have Bigsby as a top 10 running back in college football for 2022.

“Tank’s work ethic on the field is as high as I’ve ever seen,” Wiggins said. “He has incredible athletic ability, but his work ethic is at the highest.”