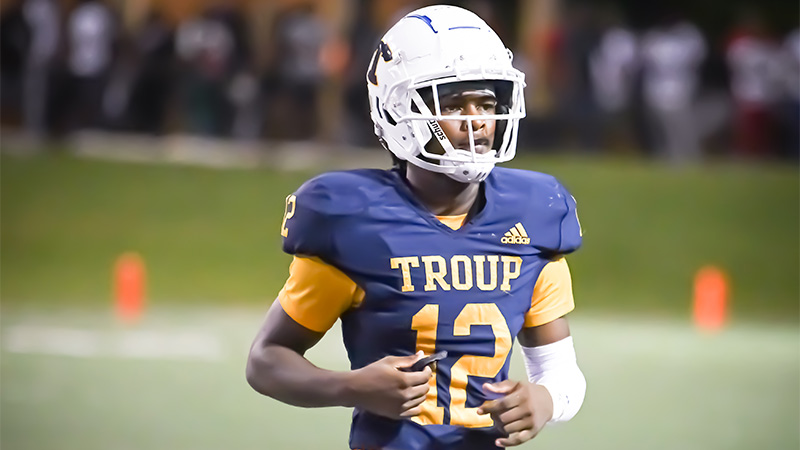 Welcome to Troup County. Logan Sinkfield said hello to the area earlier in the year, but made his presence truly known with a spectacular performance for the Troup Tigers against Hardaway in week two of the high school football season. Sinkfield diced the Hawks up with two spectacular catches where he high-pointed the football above a defender.

“It was good to get out there and play and get the ball in my hands,” Sinkfield said. “I felt like I showcased what I can do.”

Sinkfield ended the game with 2 catches for 90 yards and a touchdown as well as completing one pass for three yards.

There will be more chances to showcase his talents as he has worked his way up the ladder since transferring to Troup High in the offseason. Formerly of Creekside High in Fairburn, Sinkfield said his family needed a change of scenery. They found it in Troup County because of the presence of Troup coach Tanner Glisson.

“My Dad knows Coach G(lisson) from when he watched my dad play in high school,” Sinkfield said.

It was a strong connection between his father and Glisson that helped bring the family to the area, but the younger Sinkfield is forging his own connection with his new head coach.

“Coach Glisson told me he was excited to have me,” Sinkfield said. “We had a sit down and talked about what positions I would be playing and what I could bring to the team, and it was an awesome experience.”

Sinkfield, a junior, is one of the team’s primary receivers behind Qua Moss, sees plenty of time at cornerback and is the team’s backup quarterback. He is a do it all type of player for the Tigers. His versatility has already been on display through two weeks. In the opening game of the season against Harris County, Sinkfield played the entire second half at quarterback. Sinfield finished the game going 3-for-4 for 31 yards and caught a pass in the first half.

“I just wanted a shot and a chance to make plays,” Sinkfield said. “It doesn’t matter what position I’m in. I’m a team player.”

Sinkield will sacrifice individual stats to align in the position that best suits the Tigers.

On offense, he has already struck up a rapport with starting quarterback Taeo Todd, who both throws the ball to Sinkield and serves as his mentor at the quarterback position.

“Taeo and I have been locked in since day one,” Sinkfield said. “Everybody on offense has been coming together. We are going to be really dangerous this year.”

Sinkield is a grinder on the gridiron, but it is not his primary focus.

“My first goal is to make sure that I’m doing well academically,” Sinkfield said. “I have a great GPA, and I’ve always been on top of my grades. I’m always going to tackle my grades first.”

His grades have to be up or he will face the wrath of his mother at home.

Despite transferring in, Sinkfield walks the streets not as a pariah, but as someone who has been at Troup their entire life.

“I love my teachers and my teachers love me,” Sinkfield said. “I’ve already built strong relationships here. Troup has been really good to me.”

Troup has been more than just a safe space for Sinkfield. It has helped him re-energize his play on the field. Sinkfield has taken advantage of how his new high school helps prepare his body for game days. He is presented with a state of the art weight room at Troup that he did not have at his previous spot. Now, he feels stronger and faster than ever.

“I wasn’t half the player there as I’m going to be at Troup,” Sinkfield said. “We are working everyday, every morning, every afternoon to get better.”