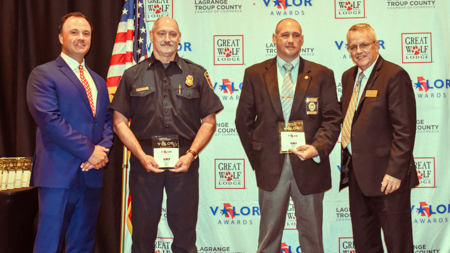 Lt. Scott Hester of the Troup County Fire Department and Capt. Kevin Carter of the West Point Police Department were given the Medal of Merit. -- Tommy Murphy 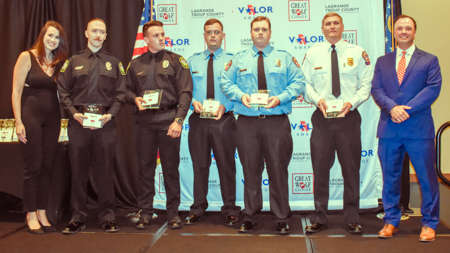 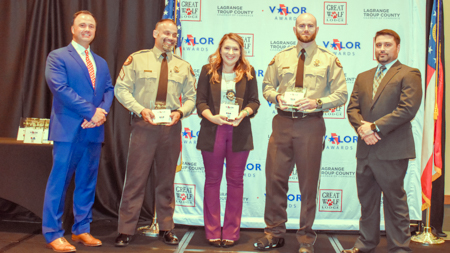 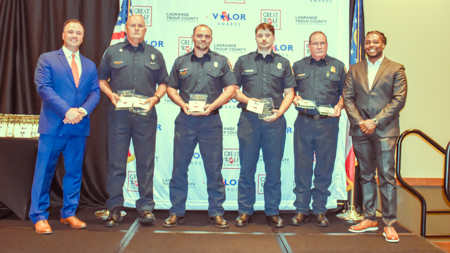 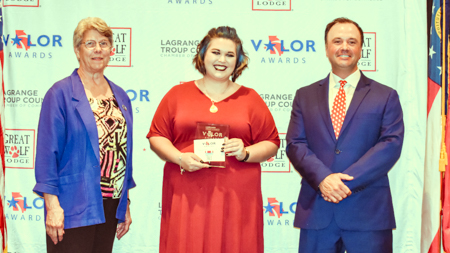 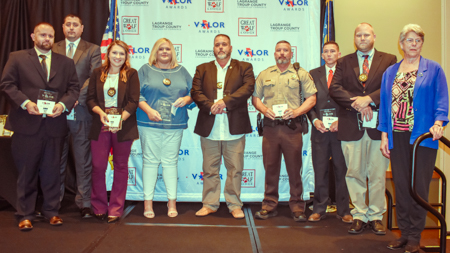 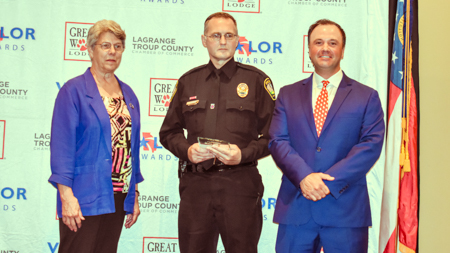 On Thursday night, the LaGrange-Troup County Chamber of Commerce held its 2022 Valor Awards banquet. The annual event recognizes first responders for their brave actions that help keep our community safe.

A total of 66 first responders were nominated for awards and there were 41 winners. The awards given included the Purple Heart, Medal of Merit, Public Safety Person and Unit of the Year, Life Saving Award, and Bronze, Silver and Gold Medals of Valor.

Capt. Marty Reeves of the Troup County Sheriff’s Office was awarded the Purple Heart Award. The award is given to a service member who greatly sacrificed themselves during the line of duty.

On Dec. 3, 2021, Reeves was assisting escorting an inmate into the booking area of the Troup County Jail as part of his duties as administrator for the facility. According to Sheriff James Woodruff, the inmate attempted to pull away from Reeves, causing himself and Reeves to fall to the floor.

Reeves was knocked out when he hit his head on the floor and during the fall and he was airlifted to Columbus Medical Center. It was later determined that Reeves suffered damage to his neck and vertebra, and he had to undergo surgery to repair the damage from the fall. He spent nearly two weeks in the hospital before returning to work on Feb. 9, 2022.

Reeves continues to undergo physical therapy and rehab due to the injuries and may need additional surgeries in the future.

Reeves was unable to attend the Valor Awards event but was presented the award during a pre-taped video.

Two years ago, Lt. Hester started a CPR and AED training program for Troup County employees, which has grown into an outreach program where members of the community can take classes on CPR and AED, as well as relief of airway obstructions for adults, children and infants.

Over 200 members of the community have taken advantage of this program so far.

For his efforts to arm the public with lifesaving knowledge, Hester was awarded the Medal of Merit.

Carter was awarded the Medal of Merit for his community service efforts as head of safety for West Point Day. He also serves as an internal affairs investigator and a firearms instructor for the agency.

Det. Chris Montondo of the LaGrange Police Department was named the Public Safety Person of the Year for his excellent work in solving cases with the department’s Criminal Investigation Section. The Public Safety Person the Year is an individual who has performed with exceptional skill, expertise and innovation to achieve results that keep the community safe and make LaGrange and Troup County a better place to live.

During one of the homicide investigations, Det. Montondo brought the incident to a quick resolution by identifying and arresting the suspect within 12 hours.

“He’s always been regarded highly for his leadership and has received excellent feedback from members of the community,” LaGrange Police Chief Lou Dekmar said.  “Det. Montondo has proven to be a vital member of our staff.”

Public Safety Unit of the Year

The unit was given the award for their swift resolution of two high-profile murder cases in 2021.

On Aug. 9, 2021, sheriff’s investigators received a case regarding a body that was found floating in West Point Lake. After the body was recovered, the victim was determined to have been shot. The following day a second victim was found in the lake in a similar manner.

Troup County sheriff’s investigators identified the victims and were able to place a suspect in custody for the murders in three days.

They were able to identify and track down the suspect who had fled the state and took him into custody within 48 hours. The suspect was later charged with a murder and feticide.

“I’m happy to say that the challenges they faced were met with resolve and an unwavering need to gather the facts,” Woodruff said. “Thank you to our Criminal Investigations Division for their dedication to seeking justice and working tirelessly to solve two separate high-profile cases to get murderers behind bars.”

Communication Person of the Year

Amber Jones of Troup County 911 was named Communication Person of the Year Award.

The award is given to communication personnel who tend to say just the right things at the right time during emergency situations.

On Nov. 18, 2021, Jones received a hysterical call, where the caller stated that he was on the scene of a car crash and one of the vehicles was on fire with the driver was trapped inside the burning vehicle. Jones was able to help calm the caller in guiding him to look for a way help the trapped driver out of the burning vehicle.

Even after they realized this was not a possibility, Jones stayed on the phone with the caller and calmed him down and made sure he was in a safe location while directing emergency services to the crash.

Two agencies tied for the Life Saving Award. Officers Noah Shelnutt and Alan Bates, of the LaGrange Police Department, and Lt. Josh Williams and firefighers Eric Hendricks and Quinten Brown, of the LaGrange Fire Department, were given the award for separate life-saving heroics in July 2021.

On July 4, 2021, Williams and Hendricks were dispatched to an unconscious person. When they located the victim and a bystander that had initiated CPR, firefighters assumed care for the patient. The patient was pulseless and struggling to breathe. After two defibrillation shocks, the patient began moving, breathing and speaking.

Williams and Hendricks’ quick actions meant the difference between life and death for the patient.

Later that same month on July 16, 2021, Officers Shelnutt and Bates responded to a call for a motorcycle accident with injuries.

The driver had lost control of the motorcycle, left the roadway and struck a house. The driver was found unresponsive, without a pulse and not breathing. Shelnutt and Bates immediately began CPR and shortly afterwards the victim began to breathe on his own.

The driver not only survived, but recently visited the LaGrange Police Department to meet Shelnutt and Bates, who saved his life.

On Oct. 5, 2021, the crew was called to the scene of a vehicle accident, and they soon realized the car had been riddled with bullet holes and the pregnant driver was unresponsive. Using the jaws of life, the driver was removed from the vehicle, and she was confirmed to have been shot multiple times.

The fire department personnel stayed on the scene until the patient was transported to the hospital.

Though the victim later succumbed to the gunshot wounds, the crew was given the award for their dedication and response in a time of crisis.

Sgt. David Murphy, Dep. Brady Pike and Inv. Jessica Noles, of the Troup County Sheriff’s Office were given the Silver Medal of Valor for their handling of a man with a gun on West Point Rd.

On April 14 2021, Troup County 911 received multiple calls regarding the man walking in the area of West Point Rd. waving a handgun and pointing it at citizens and himself.

Deputies found the suspect waiting with a pistol, and he pointed it at the deputies. The suspect gave verbal commands for him to drop the weapon, which were ignored as he continued toward a residential area. The suspect was then subdued and taken into custody by the deputies.

“The selfless actions and bravery these deputies displayed confirmed their mission to preserve the peace, maintain order and protect lives,” Woodruff said.

On Nov. 16, 2021, police responded to a report of a suicidal subject who was in the company of his young sons in the Sunny Point area of LaGrange. Police spent six hours negotiating with the subject who was heavily armed, refused to cooperate and threatened to shoot officers.

The emergency service unit was finally able to negotiate the release of the children, and they were taken into care.

Police then learned that there were multiple firearms and explosives inside the residence and a plan was developed to evacuate the surrounding neighborhood. During the evacuation, the suspect was seen walking nearby with an AR-15 and he fired multiple rounds, placing officers and residents in imminent danger.

Over the next 16 hours, police made multiple attempts to safely resolve the incident, but were rebuffed with hundreds of rounds of gunfire.

The subject barricaded himself in the home as officers attempted to breach the residence, but they were met with gunfire.

A fire was later observed in the garage, which grew quickly and erupted a stockpile of ammunition and explosives in the home, killing the suspect.

“To this courageous team that confronted domestic terror, gunfire and a deadly explosion, we congratulate the LaGrange emergency service unit on being awarded this year’s Gold Medal of Valor,” Dekmar said. “Thank you for your unwavering and selfless service to our community.”