LaGrange hangs tough with one of the top teams in AAAA 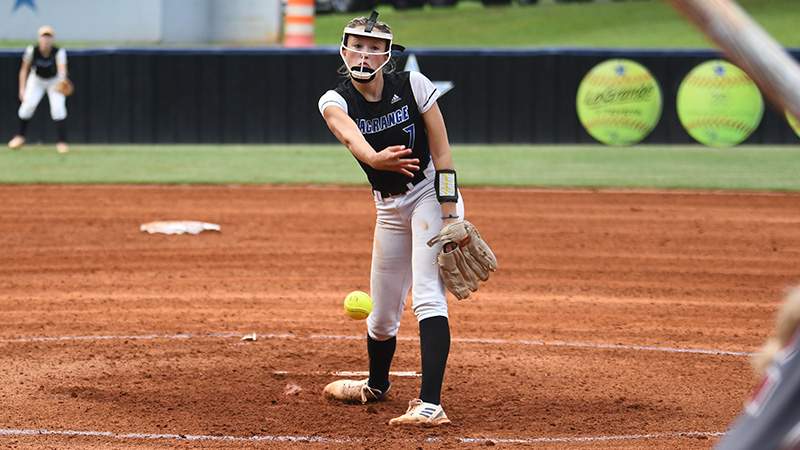 The LaGrange softball team put up a fight against one of the top teams in AAAA – Whitewater – on Tuesday evening. The Wildcats are a perfect 12-0 on the season and lead LaGrange’s region with a 6-0 record.

“I don’t think there will be a harder team we play this season,” LaGrange coach Craig Mobley said.

Whitewater hit the Grangers with two runs in the first inning before scoring two in the second inning on a Jillian Williams home run over the center field wall.

It was a game of inches as the Grangers’ offense could get precious little going over the course of the game. The Grangers were held hitless but were able to generate some offense in the sixth inning on a Hudson Wood ground out to drive in Addyson Arnett. LaGrange could not capitalize further with Tatiana Dudley on third base with two outs.

Makayla Cofield – a Georgia Tech commit – had the Grangers guessing all night as she fanned 13 batters in her five innings on the mound.

“It’s a game of confidence,” Mobley said. “When you’re facing a pitcher like that, you can’t be results oriented, you have to be growth oriented. You have to take every at bat and every pitch as an opportunity to show growth.

Kaylee Foster got the start on the mound for LaGrange and settled in nicely after a bit of a shaky first inning. Zoe Thompson came in to relieve her in the third inning and shut the door on the potent Whitewater offense. She limited the Wildcats to four hits and no earned runs to go along with a lone strikeout in her five innings on the mound.

“Zoe came in, closed things up and did a really good job for us on the mound,” Mobley said.

LaGrange drops to 8-5 overall and 2-2 in region play. The Grangers currently occupy the fourth and final playoff spot in the region. LaGrange is one game behind Trinity Christian and Troup and are 1.5 games ahead of fifth place Starr’s Mill.

The Grangers will return to action in Granger Park on Thursday against the sixth place team in region 4-AAAA, Fayette County.