Athlete of the week: LaGrange’s Parker Shattuck is a dominant two-way player 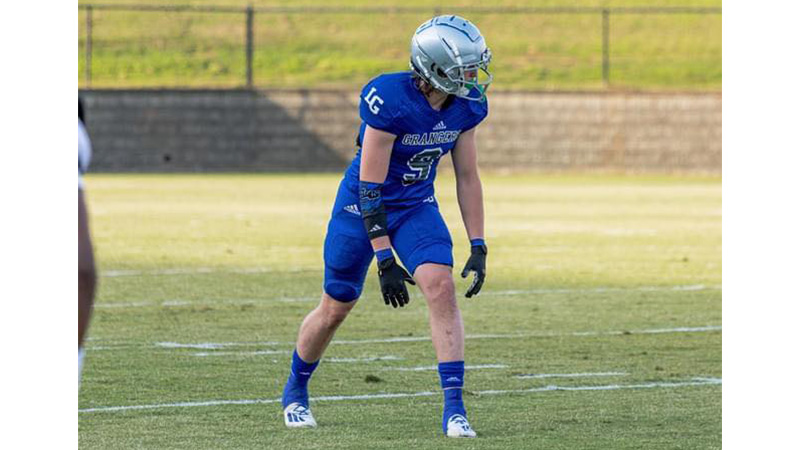 Parker Shattuck put on a dominant defensive display in week two against Northside to earn LaGrange Daily News’ athlete of the week honors.

“It was awesome to get back on the field and play some defense,” Shattuck said. “I haven’t played much defense since last season.”

There was no signs of rust for Shattuck as he accumulated four tackles, two tackles for a loss, one sack, two quarterback pressures and one batted pass. If that was not enough, he forced both interceptions by Northside on quarterback hits and paved the way for the potent Granger rushing attack from his tight end spot.

“Early in the season, we wanted to give some of the two-way players some rest,” LaGrange head coach Matt Napier said.

Shattuck is not looking for rest. He is looking to make plays.

“It can be tough, but your body gets used to it,” Shattuck said about playing both ways.

Shattuck has played defensive line in middle school and on JV but made the switch to linebacker last season on defense. Shattuck has grown in size during the offseason and is happy to be back at defensive end.

“I feel like I’ve gotten a lot bigger,” Shattuck said. “I love playing defense because I get to go around and hit people.”

At just a junior, Shattuck likely still has some growing to do. Already standing at 6’2 and 215 lbs, he can be a daunting force for any offensive lineman to block. He has speed to go along with his strength and is a real weapon for the Grangers on both sides of the ball.

“I actually like playing both sides of the ball,” Shattuck said.

While he is a two way player, he is already being scouted by Georgia State and Coastal Carolina as a tight end. Shattuck likes both schools but is not ready to commit yet as he works his way through his junior season.

The Grangers offense does not present many chances for Shattuck to catch the ball, but he will do whatever it takes to win as he throws his body around on offense.

“I’ll do whatever it takes to help our team win,” Shattuck said. “Malachi (Fannin-Render) has rushed for 450 yards in two games, so it is really rewarding to see the stat sheet.”

Shattuck’s team first approach is what makes him such an integral part of the Granger lineup.

“He has an impact on both sides of the ball,” Napier said. “His blocking is huge for us. He made several key blocks to spring Malachi in week two.”

Napier has had a monumental impact on Shattuck since Napier took over as head coach during Shattuck’s freshman season. They have known each other since Shattuck played rec ball, which has helped them establish a relationship during his tenure at LaGrange High.

Napier is not the only coach at LaGrange who has had a big impact on Shattuck.

Shattuck and the Grangers will be back in action on Thursday against Upson-Lee after having a bye week last Friday.