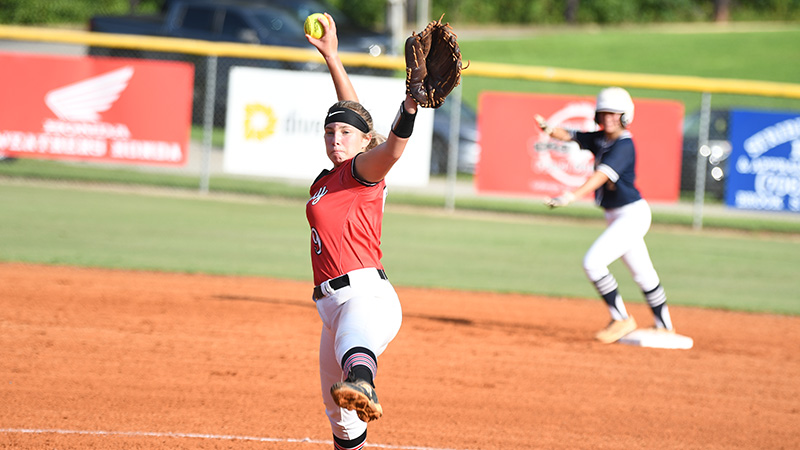 Mackenzie Toney had no time for the Landmark Christian batters as she completed the first no-hitter of her high school career in Callaway’s 9-1 victory.

“It was super exciting,” Toney said. “I was feeling good up there.”

Toney, a freshman, stole the show with her five inning no hitter. She struck out seven batters and a single walk separated her from a perfect game.

“She was in and she was out. She was up and she was down,” Callaway coach Josh King said. “She commanded the strike zone.”

The Callaway offense got back to work after the previous night’s stellar showing.

The Cavaliers plated two runs in the bottom of the second inning to get the good times rolling. Ava Shuford scored on an error before Jasia Swanson hit an RBI double to give the Cavaliers a quick 2-0 lead.

Landmark Christian answered with a run on a walk and an error in the top of the fourth to cut the Cavalier lead in half. Just when it looked like Landmark Christian stole the momentum, King rung the bell and his ladies answered.

The Cavaliers scored its final seven runs in the bottom of the fourth to put some distance between themselves and their opponents.

Kinley Smith scored on a passed ball to make it 3-0. Emma Bryan showed good patience to take a walk with the bases loaded to drive in the second Cavalier run of the inning. Mya Lawton broke the game open with a two-RBI, double that made it 6-0 Cavaliers. Shuford reached on an error as Lawton and Bryan reached home plate. Shuford stole third before making it all the way home on an error.

“After a slow start, we’re beginning to see some good things start to happen on offense,” King said.

Toney recorded three outs in the top of the fifth to complete her no-hitter and secure the win for Callaway.

“The defense did an amazing job behind me,” Toney said. “Kait(lyn) Williams was pretty phenomenal. She made a couple of great catches.”

Swanson proved ultra-efficient for the Cavaliers as she went 1-for-1 with a run scored and an RBI to go along with a hit by pitch. Lawton led the team with two RBIs on 1-for-3 hitting with a run scored. Bryan had the other RBI in the game for Callaway and added a run scored and a walk to her stat line. A day after pitching a perfect game and driving in four runs from the plate, Kaitlyn Williams was a bit quieter but still a major part of the Cavalier offense as she went 1-for-3. Smith and Shuford led the team with two runs scored apiece.

“We’re not worried about the pre-season games and the non-region games,” King said. “These are the ones that matter.”

Callaway improves to 4-7 overall and starts the season 2-0 in their new region. The Cavaliers will be traveling to Columbia for their third region game this week on Thursday.