Troup loses to Harris County in battle of the Tigers 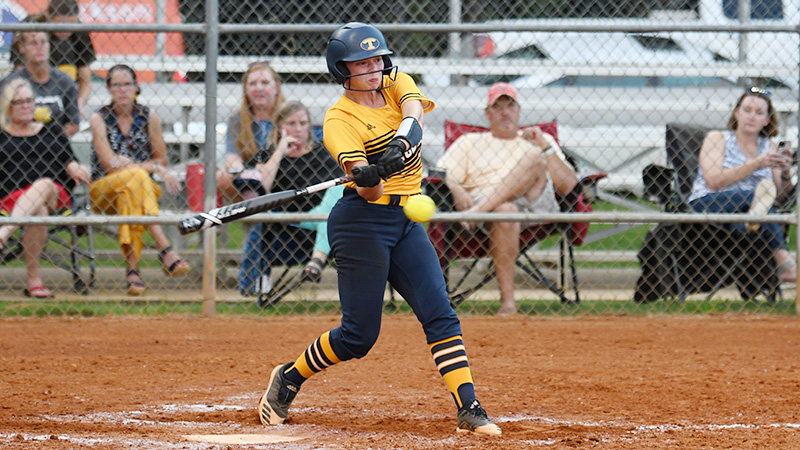 That is what Troup coach Ryan Simpson had her team do after a 7-3 loss to Harris County on Wednesday night.

“They had five errors,” Simpson said bluntly. “We left a bunch of people on base, and I should have made them run for that too, but I didn’t. I’m nice.”

It has been a start and stop stretch for the Troup Tigers as this is only their second game since Aug. 25 as inclement weather has kept them away from the diamond.

“Last week, we got rained out and, shoot, this week we’ll probably get rained out too,” Simpson said. “It’s nice to get back on the field. We have to take what comes and roll with it.”

Harris County took a quick 1-0 lead in the top of the first inning before adding another in the fourth.

The Troup Tigers were able to cut into the lead when Patience Walker hit a ground ball and reached on an error to score a run. Troup had runners on second and third with no outs and could not capitalize further.

Harris County answered with four runs in the top of the fifth as the game slipped out of reach for the Tigers.

Troup was able to grab a couple of runs in the seventh inning when it looked like the Tigers might be able to pull off a rally. Maggie McDonald flew out with the bases loaded to score a run and make it 7-2. Sheniyah Philpot hit a single to drive in another run for Troup. She was 2-for-4 with an RBI as one of the bright spots for the Tiger offense.

Harris County got the final out and walked off Troup’s field as the victors. Troup actually outhit Harris County 10-9 but could not find the timely hits.

“We had a ton of base runners. We were hitting well, so I can’t complain about that,” Simpson said. “We just couldn’t get hits at the right time.”

Madeira sirmons certainly did her part as she went 3-for-3 with a run scored. McDonald went 1-for-3 with an RBI.

Ramsey Clark did not get a hit, but Simpson raved about her defense at shortstop. Clark has been one of the best offensive players for Troup this season, and her rangy defense is just as important.

Camdyn Bassett pitched six and 2/3rds innings and did not allow an earned run on six hits and six strikeouts to lower her season ERA to .71 on the season. Faith Horton relieved her temporarily in the game.

“Camdyn Bassett showed out today. I’m proud of her,” Simpson said. “She’s becoming a really good pitcher. I couldn’t be more proud of her.”

Troup fell to 7-3 overall on the season, but their 3-1 region record stays intact. The Tigers are second in region 4-AAAA. Troup will be back in action in a region battle with Trinity Christian – third in the region (3-1) –  at home on Thursday at 5:30 p.m.