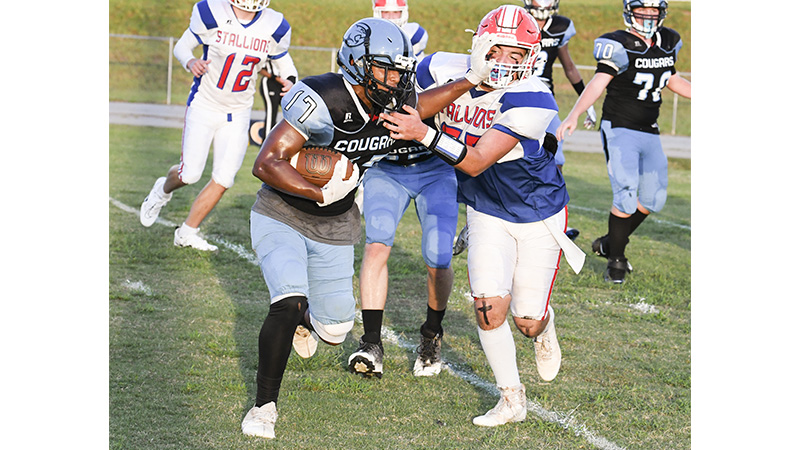 With eyes on going 3-0, the LaFayette Christian football team is in for a tough match in week four against Praise Academy on the road.

“They are also 2-0 and won their last game 40-7 against Dominion Christian,” Cougar coach Jared Pike said. “They have some good players with speed, so we will have to execute.”

It will be a tough test for the Cougars made even tougher by the fact that LaFayette Christian will be a little short handed as starters Alex Tusing, Paul Batastini, and Tyler Dollar will all miss this week’s game. All three players are upperclassmen and will have to be replaced by freshmen. Tusing was the leader on defense and Pike is looking to freshman linebacker Brandon Davenport to fill some of the leadership void.

“He’s been starting, but he hasn’t made any of the calls yet,” Pike said. “We’re putting a lot on his plate this week.”

Starting quarterback Andrew Hough will see more time at safety this week after having a pick six in week two versus Holy Ground.

The offense will have to ride the Hough- Chaz Clark connection that produced two touchdowns of 50+ yards in week two, but the primary focal point will be running back Ephraim Snyder once again.

“It’s going to be the Andrew and Ephraim show,” Pike said. “Ephraim knows now that by the fourth quarter those guys aren’t going to want to tackle him.”

Snyder has torn his first two opponents apart en route to 389 rushing yards and six touchdowns. The junior running back has been a weapon for the Cougars, but it is his ability to grind out yards late in the game that has made him so special.

Clark will have to step up once again this week. The Cougars wide receiver core is decimated as all three guys missing this week are important pieces in the wide receiver room. This does not include Braden Firth – a senior tight end/wide receiver – who Clark was a bit anonymous before dominating in week 2 with over 100 yards receiving.

With a depleted roster, this week’s matchup with Praise Academy will reveal a lot about the character of the young Cougar squad.

“We’re going to find out if these younger kids can play at a higher level,” Pike said. “There is a big difference between a 14-year-old and an 18-year-old.”

The Cougars (2-0) are on the road on Friday in Powder Springs. Kickoff is scheduled for 7:30 p.m.