BACK ON TRACK: Callaway toughs out victory over Heard County to earn first win 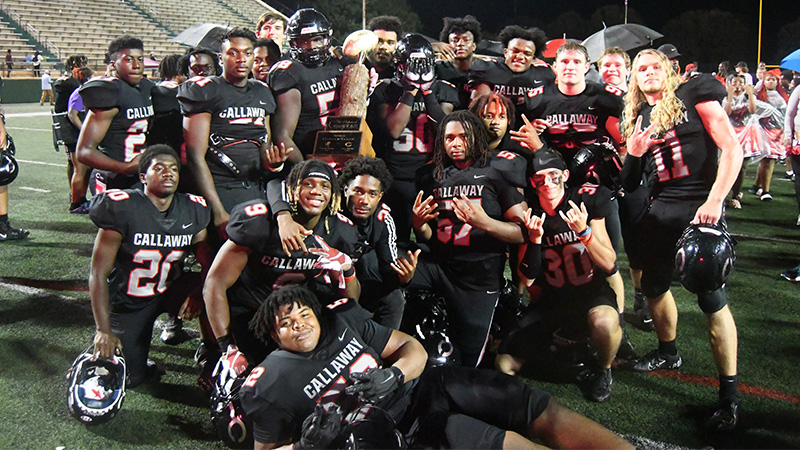 Sweet relief. The Callaway football team grinded out a tough 21-7 win over Heard County in the Pulpwood Classic game on Friday night. After starting 0-3, the Cavaliers can take some momentum into the bye week and then region play.

“I’m really proud of the guys for keeping a positive attitude during some tough times,” Callaway coach Pete Wiggins said. “Tonight is a testimony to the character of our team.”

The first quarter was a grind as both offenses tested out the opponent’s defense. The Cavaliers broke the deadlock with under 20 seconds to go in the first quarter when DeShun Coleman hit Exavious Reed on a short swing pass. It was not as simple as it sounds. Reed was running to his left when he saw a clogged lane and decided to reverse field, made a couple guys miss and reached the end zone.

Heard County missed a field goal in the second quarter before Callaway missed one as well late in the second.

Callaway had a potentially costly fumble with under a minute to go in the first half that set up the Braves on Callaway’s 32 yard line. Callaway’s defense answered the bell as Korey Jackson went up, high pointed the football, and reeled in a spectacular interception.

The Cavaliers had to settle for a 7-0 lead at the break.

“Our defense played fast,” Wiggins said. “Heard has a good football team, but we were able to establish the line of scrimmage.”

The second half featured a bit more scoring but was still a slow paced grind it out affair.

The Cavaliers were able to double their lead pretty quickly in the third quarter as Quay Whitfield pounded the ball into the end zone from 12 yards out. The offensive line in conjunction with Whitfield and Jordan King dominated the game for the Callaway offense.

“We stayed the course on offense,” Wiggins said. “We had a couple of turnovers early, but it didn’t sway us. We were physical all night on offense.”

Callaway all but put the game away on the first snap of the fourth quarter with King taking it from 1 yard out as the wildcat quarterback.

The fourth quarter flew by until the Braves got on the board with a 60+ yard bomb with under 20 seconds remaining. It stopped Callaway from pitching a shutout on defense but had very little impact on the game.

The Cavaliers got the win and earned the chance to celebrate with the Pulpwood Classic trophy for at least another year.

“It’s been tough playing the schedule that we play,” Wiggins said. “To get a win against a rival and good football team like Heard is very special.”

This is the Cavaliers fourth straight win over the Braves.

Callaway improves to 1-3 on the season. The Cavaliers will have a week off next week before returning to action on Sept. 23 in their opening region game of the season against Redan at Callaway Stadium.

“We’ll watch a lot of film,” Wiggins said. “Just because it’s a bye week does not mean we are going to stop doing what we do.”