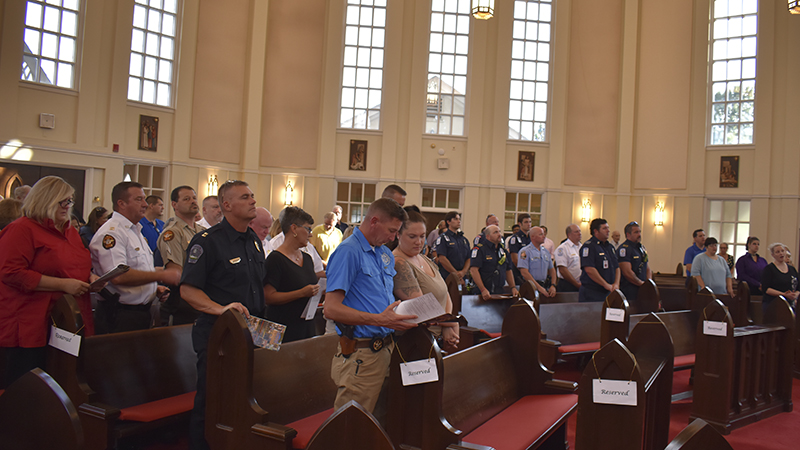 First responders of all types were in attendance for the annual Blue Mass at St. Peter's Catholic Church in LaGrange.

Father Tim Gadziala has held the service each year since he became the pastor at St. Peter’s in 2017, only skipping one year for COVID.

Gadziala said they hold the Blue Mass each year in September to help the remember the sacrifices made by first responders during rescue efforts after the Sept. 11 attack on the World Trade Center.

“We all know in our hearts where we were on Sept. 11,” Gadziala said. “Our country was united together on that day with a common purpose to pray for our nation, pledging to never forget.”

“On that day, many lives were lost and many more survived. Many first responders gave their lives to save those lives,” he said. “Such is their call of duty for selflessness and heroism.”

Gadziala said he had been in graduate school at The Catholic University of America in Washington D.C. studying canon law when the attack occurred. Prior to coming to St. Peter’s, Gadziala worked as a lawyer for the church helping administratively with the missionary work of the Diocese of Mandeville in Jamaica.

“I may have come from out of the country and studied up north, but I’m a southerner at heart,” Gadziala said after the service, noting he is a Lilburn native, and he got his undergraduate degree from the University of Georgia.

Gadziala thanked all of the first responders for their service. He particularly thanked EMTs, recalling a story where one likely saved his life.

The reverend explained the one evening he had been experiencing some chest congestion prior to mass and had his blood pressure taken by an EMT. The EMT recommended that Gadziala go to the hospital and had a gurney waiting for him immediately after he finished the service.

“If not for that EMT, I might not be here today,” he said.

Gadziala said all first responders are invited to attend the annual Blue Mass service regardless of their faith.

“We thank you for thanking us for what we do each and every day,” Woodruff said. “It’s an honor to help protect the people of LaGrange and Troup County.”