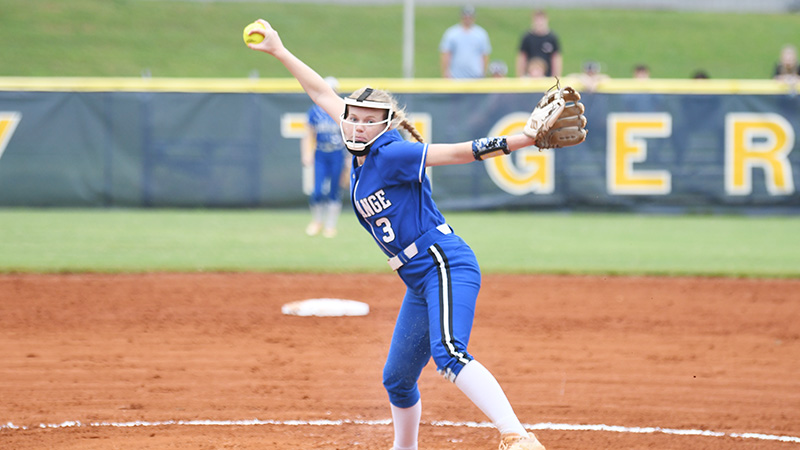 Crosstown rivals met again on Friday evening as LaGrange softball toppled Troup 5-0 to avenge a loss from earlier in the season.

“It’s always good when you get a win, especially against your crosstown rivals,” LaGrange coach Craig Mobley said. “These girls have been playing with and against each other since they were little so it feels good to come out with a win.”

After controlling the game against LaGrange in their first meeting, the Tigers could not muster enough timely key hits. The Tigers actually outhit the Grangers 7-5 but errors doomed Troup. 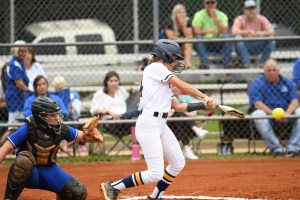 “Defensively, we did not do what we needed to do,” Troup coach Haley Dodgins said. “We got outplayed in all aspects.”

The unquestionable player of the game was sophomore Zoe Thompson, who pitched a complete game shutout for the Grangers. In seven innings, she fanned eight batters and only allowed seven hits.

“She mixed her pitches all night,” Mobley said. “She had a good changeup and curveball. She had all her pitches going tonight.”

The game was locked in a pitcher’s duel between Thompson and Troup’s Camdyn Bassett until the Grangers opened the scoring in the third inning with Shelby Siggers scoring on an error. Kimberly Reynolds grounded into a fielder’s choice to drive in the Grangers second run of the inning and make it 2-0.

The lead stayed at two until the Grangers added an additional run on a Carolyne Garcia RBI single in the sixth inning.

The Grangers delivered the knockout punch in the top of the seventh with two more runs. Harlee Overton hit a single to drive in the final two runs of the game.

Troup actually got base runners with its first two batters in the seventh inning, but once again could not come up with some timely hitting.

“We just can’t keep leaving players on base,” Dodgins said. “We left a lot of runners in scoring position tonight.”

Maggie McDonald led the way for the Tiger offense as she went 2-for-3 in the game. Hailey Cotton, Anna Grace Keller, Madeira Sirmons, Shelby Addison, and Kaleigh Rutland all had a hit apiece for the Tigers.

Bassett got the start on the mound for the Tigers and pitched a complete game while allowing five hits and two earned runs on seven strikeouts.

“She carried us today,” Dodgins said.

LaGrange improved to 10-5 overall and 4-2 in region play. The Grangers will be back in action on Monday against Northside on the road.

“We have to keep coming up with timely hitting,” Mobley said. “I don’t care if it’s the first inning or the fifth inning or the seventh inning. We have to have girls step up.”