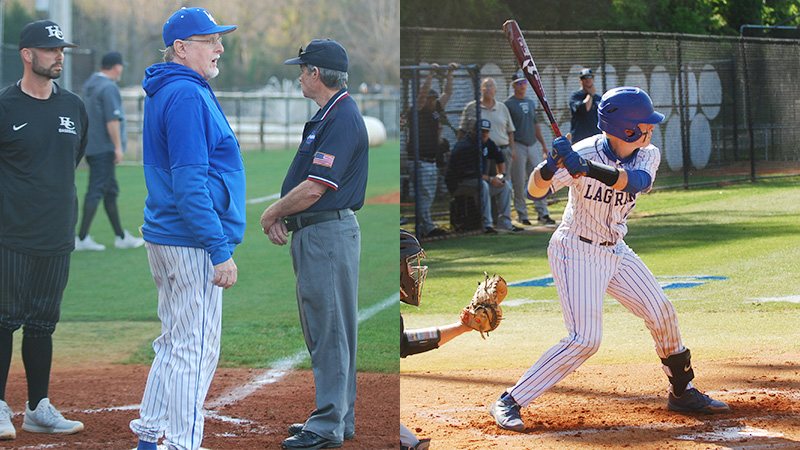 A special season for the LaGrange baseball team got an epilogue with Zack Thompson and Donnie Branch being named AAAA state co-player and co-coach of the year by the Georgia Dugout Club. Branch is no stranger to this award as he won it previously in 1992, 1995 and 2004.

“It’s like picking between your favorite kids, all four years were pretty special,” Branch said. “It’s a really big honor to win despite not winning state. What made this year so special was that it came out of nowhere.”

Branch’s legacy is set in stone with a 2004 state championship in baseball to go along with 596 career wins. At this point, he is adding to his legendary aura. Branch was inducted into the Georgia Dugout club Hall of Fame in 2009.

For Thompson, it was a dream come true.

“One of my goals at the beginning of the year was to win AAAA player of the year,” Thompson said. “I had a lot of people help get me to that.”

Now, a player and coach are linked forever together in Granger baseball lore. The bond between these two men began long before they received these honors together.

“I was at a private school my eighth grade year, but I came back to go to LaGrange because Coach Branch was coming back to LaGrange,” Thompson said. “He’s an outstanding coach and has made me so much better.”

The admiration and respect is a two way street between the two men.

“He was a role model and leader for the younger guys and always produced on the field offensively and defensively,” Branch said. “I remember in ninth grade when he was the only freshman on the team. He was the backup catcher and weighed 115 pounds. I told him he had to get bigger and get stronger and we set some goals. He gained 35 pounds before the next season. Whatever challenge has, he meets it. He graduated at 175 pounds and is going to play college baseball.”

Thompson hit .375 with 31 RBIs in his senior season. His on-base percentage of .499 kept the Granger offense alive consistently in tight ball games. Thompson also provided outstanding defense behind the plate as the team’s starting catcher.

Now, Thompson is at Gordon State applying his trade. The spring collegiate baseball schedule is still months away, but now Thompson is suiting up in the fall season to prepare for the upcoming schedule. While Thompson no longer wanders the halls of LaGrange High on a daily basis, he is still a Granger for life.

“Being a Granger is very special,” Thompson said. “If you’re a Granger, then you’re a champion.”

Branch will be back in the familiar blue and white of LaGrange next season. Branch retired as the all-time winningest coach in LaGrange history in 2012. The Grangers were able to woo him out of retirement in 2018, and he has been in the dugout in blue and white ever since. Branch never knew if he would have moments like he’s had in 2022 ever again when he said goodbye in 2012.

“I sure hoped (I would),” Branch said. “When I came back, I really just wanted to be a relevant program. I selfishly missed the kids and the coaches as well, but when I came back I wanted to have this program competing at a high level every year.”

Thompson and Branch’s paths have diverged since the runner-up finish for the Grangers back in late May. While they have gone their separate ways, they will be intrinsically tied together when talking about the legends of LaGrange baseball. Thompson will always have Branch in his corner to call upon when needed.

“He helped me so much on the field, but he also helped me get recruited,” Thompson said. “I wouldn’t be where I am without him.”

The official award ceremony will be held in December.