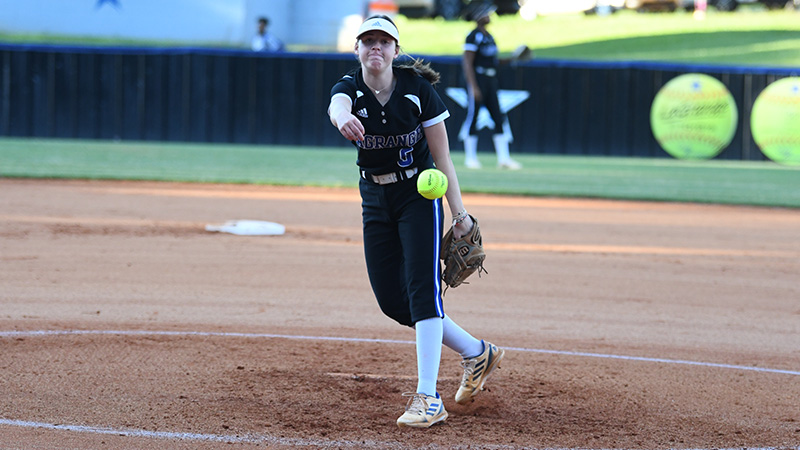 That is what Kaylee Bryant was on Tuesday night as she pitched a three-inning perfect game to propel LaGrange to a 21-0 region win over Riverdale.

“I was pretty relaxed out there,” Bryant said. “I have a lot of confidence in my defense. I’m going to pitch strikes, and I know they are going to be behind me.”

Bryant pitched all three innings with five strikeouts. Bryant also supplied some offense by going 1-for-2 game with an RBI to boot.

“She hasn’t been pitching as much this year because we need her in the outfield,” LaGrange coach Craig Mobley said. “We are one injury away from her being a no. 1 pitcher or no. 2 pitcher for us. She has to stay ready.”

Bryant has taken on more of a leadership role this season as one of the seniors on the team.

“Having them look up to me makes me want to do better,” Bryant said. “They drive me to be the best I can be.”

The Grangers were ready for the region showdown on Tuesday as they blasted Riverdale with 19 runs in the first before adding another two runs in the second inning. The game only lasted two and a half innings as Riverdale stood no match for the Grangers.

The Grangers got quality offensive performances from all over their lineup. LaGrange’s no.1 pitcher Zoe Thompson rarely gets to be an offensive player but showed what she could do with a bat as she went 3-for-3 with five RBIs and three runs scored. No. 2 pitcher Kaylee Foster also rarely gets to show her offensive prowess but got the chance to Tuesday and showed her mettle. She was 1-for-1 with two RBIs off the bench.

“I thought it was really cool (to get them in the game),” Mobley said. “I know they can bat. Their significant role is pitching, but I know they can hit too.”

“This was a team game,” Mobley said. “Some of the girls that usually don’t start, got a chance to play and their teammates were right there cheering them on.”

LaGrange improved to 11-6 overall and goes to 5-2 in the region to stay in second place.

“We are a young team and because we are so young, we are eager and determined,” Bryant said. “We put in a lot of work in the offseason, so we could try and make a deep run.”

LaGrange is in for a massive matchup with Troup on Thursday night at Granger Park. The winner of that game will be second place in the region.

“I’m sure I’ll have more to say after Thursday’s game,” Mobley said with a smile and a laugh.