LFD honors legacy of firefighters who died on Sept. 11, 2001 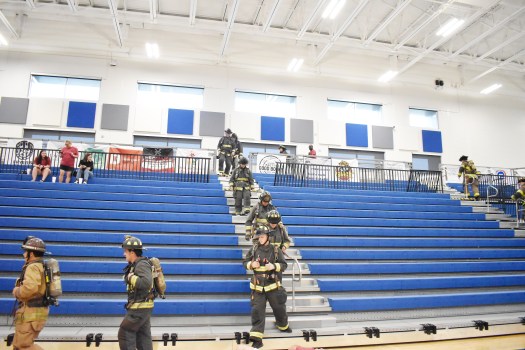 LaGrange Fire Department firefighters — some in full protective gear with oxygen tanks — climbed 110 flights of stairs on Saturday morning at the in honor of the 304 firefighters who lost their lives in the World Trade Center on Sept. 11, 2001. Other first responders and members of the public joined them in the annual challenge. 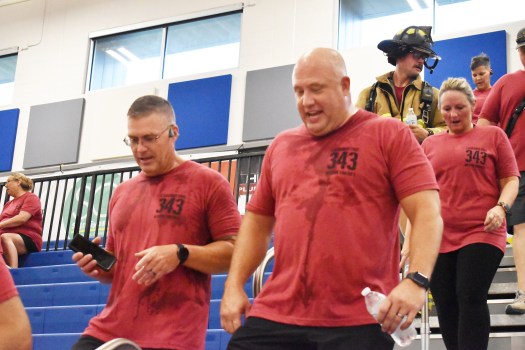 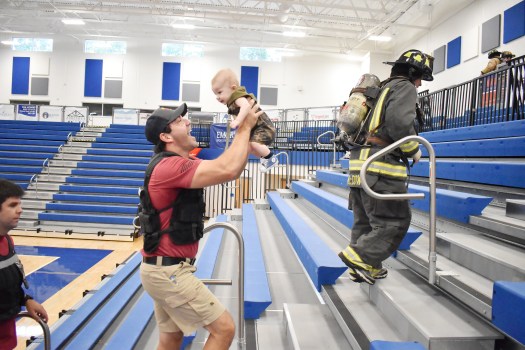 Rudy Otwell III carries daughter Rudy Otwell IV for one of the flights of stairs. Her parents call her IV for short.

The event was first held in 2018 at Callaway Stadium to honor the 304 firefighters who lost their lives resulting from the terrorist attack on Sept. 11, 2001.

“The 9/11 firefighters ran up those 110 flights, but we run down the steps too because they weren’t able to,” said LaGrange Fire Chief John Brant. “We want to honor them by coming down those steps.”

Traditionally, during the event 9/11 radio traffic is played on the loudspeakers as participants climb up and down the steps, but music was played this year instead. Brant said the echo from inside the gym made the radio traffic difficult to understand, so they decided to play music instead. This is the second year the stair climb challenge has been held at LaGrange High.

The stair climb was originally a private event for firefighters but starting in 2019 the public was invited to join LFD in the challenge as a fundraiser. Participants were allowed to join in the challenge for a $25 entry fee, which includes a 9/11 tribute t-shirt.

“We invite anyone who wants to participate to come out and join in,” LaGrange Fire Sgt. Matt Oubre said. Oubre helped organize this year’s stair climb challenge.

All proceeds from the event go to support the Terry Farrell Firefighter Fund, which was founded after 9/11, Brant said.

The fund provides firefighting equipment to fire departments that cannot afford it.

Sgt. Oubre said about 80 participants signed up for the challenge. Another 20 or so attended to cheer them on.

Brant said they run the steps so the events of 9/11 are never forgotten.

Brant also reminded everyone that there’s no shame in stopping if they need to, noting it’s not a competition. Some ran the 2,200 steps in full firefighter gear, others carried weighted backpacks and some wore t-shirts and shorts.

“We’re here to fellowship and have a good time and raise money for a good cause,” he said.