Battle of the elites: Troup prepares for toughest test yet 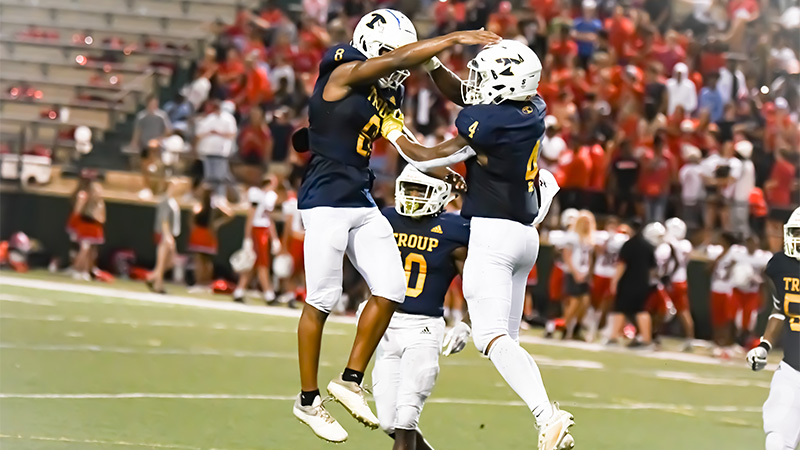 Troup is set to do battle with their toughest opponents yet – Whitewater – on Thursday.

Both teams are ranked top 10 in the state and both are top five in many of the state polls. It is going to be a war that will require the Tigers A-game.

“They are unique in some of the offensive things they do,” Troup coach Tanner Glisson said. “They are a Wing-T and like to snap the ball pretty fast.”

The Wing-T offense relies on misdirection and short passing to manipulate the eyes of defenders. It will present some challenges to the Tiger defense that has only let up 28 points across three games (one of the touchdowns in the Hardaway game was let up by special teams). Qua Birdsong leads the way for the Troup defense but had a bit of a quiet game last time out against Callaway with only four assisted tackles to his name. Expect him to rebound in a massive game at Callaway Stadium on Thursday.

The Tigers had a chance to get some R&R last week as they had a bye which means star safety Noah Dixon will have a much better chance to play against Whitewater. Last week was not just about getting healthy, it was also a chance to work on the basics as well as add some layers to the offense and defensive playbooks.

“Coming off that physical game against Callaway that took a lot out of us emotionally, it was good to have a week off to get healthy but also gave us a chance to get in some extra preparation,” Glisson said. “For the next two weeks, we will play two Wing-T teams, so having extra time to get ready for something like that is important.”

Troup’s offense will, of course, be led once again by star Taeo Todd. Todd is coming off a game against Callaway where he was 12-for-20 with 121 yards with two touchdowns and an interception while adding 14 carries for 78 yards on the ground. Todd did have a costly fumble as well but alway found a way to respond. Todd’s season stats are absurd as he is 30/48 for 464 yards with five touchdowns through the air and has 39 carries for 449 yards and eight rushing touchdowns on the ground through three games.

Qua Moss gives the Tigers a lot of pop at wide receiver and on special teams. Moss has seven catches for 198 yards and two touchdowns to lead the way for the Tigers receiving core while also adding a kick return touchdown.

Whitewater comes into the game 3-0 and has its own star talent. Linebacker Raul Aguirre is the 15th ranked player in the 2023 class in the state of Georgia regardless of position, according to 247sports. Aguirre is committed to playing football at the University of Miami. Defensive Lineman Stephen Johnson is a top 100 player in the state. The Arkansas commit will keep the offensive line of the Tigers on its heels.

“They are very talented on defense,” Glisson said. “This is a team that went to the quarterfinals in AAAAA last year, so they are used to winning. We’ve got our hands full.”

Whitewater, like Troup, is coming off a bye week. The Wildcats dominated Griffin 45-21 last time out on Sept. 2.

This will be the opening region game for both opponents. The game will take place at Callaway Stadium on Thursday with a 7 p.m. kickoff time.

“Hopefully, folks come out to watch a good football game,” Glisson said. “We always have a really good crowd, so hopefully playing at home will give us an advantage.”