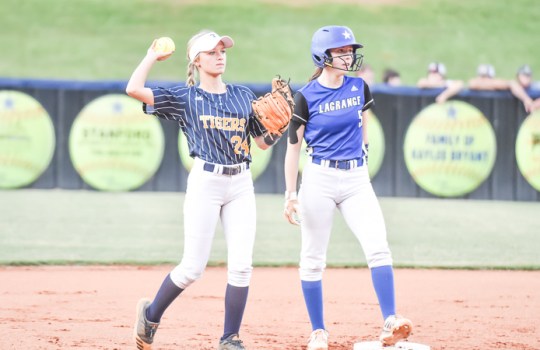 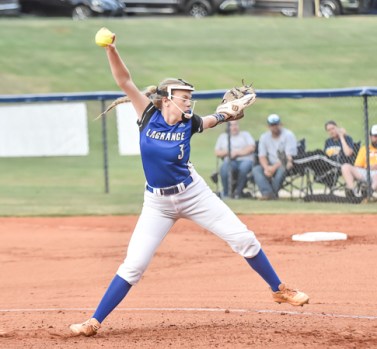 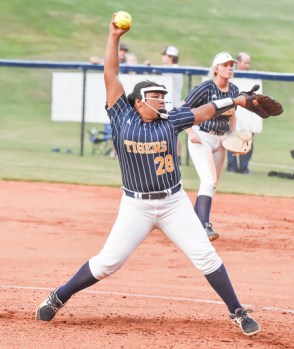 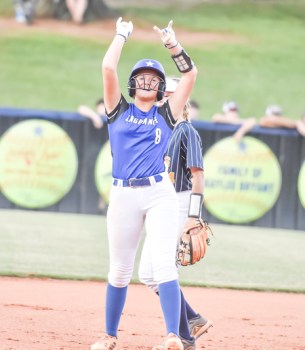 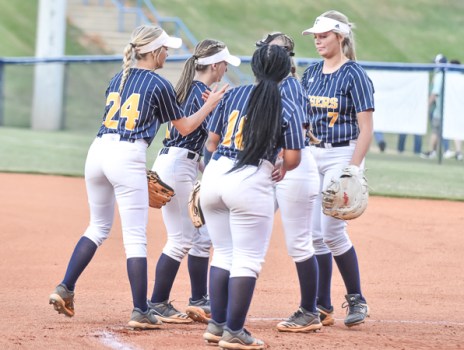 It was a dogfight in Granger Park with the LaGrange softball team earning a massive 7-5 region win over rival Troup on Thursday. This is the Grangers second win over the Tigers in the last week, and they are now in the driver’s seat to get a bye week in the playoffs as they are comfortably second in region 4-AAAA.

Thursday’s game was anything but comfortable though as the Tigers nearly erased an early deficit to mount a comeback.

The Grangers jumped on the Tigers early with five runs in the bottom of the first inning. Kaylee Bryant hit an RBI single to get the scoring going. Bryant was electric again Thursday after pitching a perfect game in her last game out. She was 2-for-3 with three RBIs and a run scored to lead the way for the Grangers offense on Thursday.

Kimberly Reynolds scored on an error before Harlee Overton drove in a run with a single to make it 3-0. With two outs and two one, freshman Shelby Siggers showed once again that she loves the big moments and delivered a peach of a two RBI double to left field to make it 5-0.

Chloe Lietchy hit an RBI single in the top of the second inning to cut the Granger lead down to four.

The Tigers kept chipping away. Ramsey Clark delivered an RBI single in the top of the fourth. Anna Grace Keller scored on a passed ball in the fifth inning and all of a sudden the Granger lead was cut down to just two runs.

The Grangers had an answer in the form of Bryant, who delivered a double to drive in the winning run of the game plus an insurance run.

The Tigers were not going to go down without swinging however. Clark reached on an error to drive in Caroline McInvale in the top of the sixth inning.

Maggie McDonald hit a solo home run in the seventh to make it 7-5, but the offense stalled as the Grangers held on to win. Even in the loss, McDonald showed out offensively, going 2-for-4 with an RBI and a run scored.

Zoe Thompson got the win and pitched all seven innings for the Grangers. She allowed nine hits and only two earned runs on four strikeouts as her defense behind her let her down a few times. The Grangers committed six errors in the game.

McDonald got the start on the mound for the Tigers and was replaced by Camdyn Bassett who ended up pitching five and a third innings. She was dominant once coming in, allowing only two hits and one earned run on 11 strikeouts.

Hudson Wood, Carolyne Garcia, Reynolds, Overton, and Siggers all had a hit apiece for the Grangers.

Sheniyah Philpot, Madeira Sirmons, Haley Cotton, McInvale, Clark, Lietchy and Keller all had a hit each for the Tigers. The Tigers actually outhit the Grangers by a margin of 9-7 but could not find timely hitting and committed three errors as well.

Troup fell to 9-5 overall and 5-3 in region play. The Tigers still occupy a playoff spot as they sit fourth in the region but will have a hard time getting to host a home game in the playoffs as they have lost to the second place Grangers twice and region leader Whitewater once as well. The Tigers will be back on the diamond next Tuesday at home to region foe Riverdale.

LaGrange improved to 12-6 overall and are 6-2 in region play. The Grangers will be back in action on Monday against Shaw in Granger Park.