Troup takes down no. 5 team in AAAA 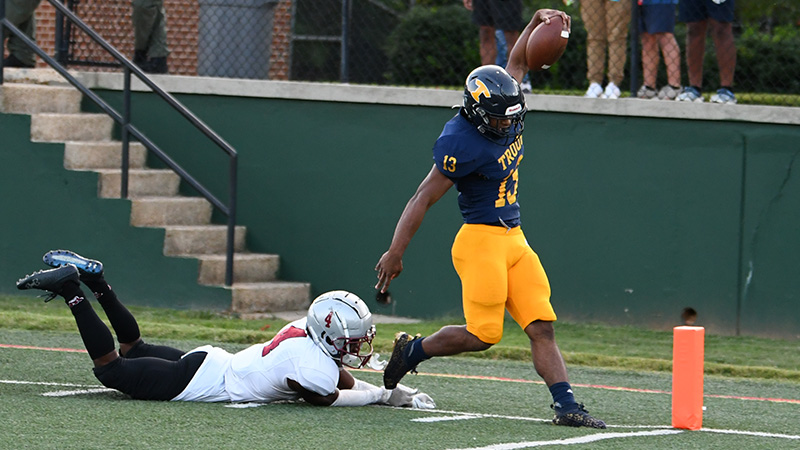 An instant classic played out on the field of Callaway Stadium on Thursday night as the no. 7 ranked Troup Tigers defeated the no. 5 ranked Whitewater Wildcats 43-33. Rankings are according to the Georgia High School Football Daily composite rankings as of week four.

The game was essentially decided on a fourth and goal play from the five-yard line with 1:46 left. Taeo Todd suffered cramps on third down and had to be taken out of the ball. Up stepped backup quarterback Logan Sinkield who delivered a strike to Qua Moss on his only pass attempt of the game.

“I can’t even express how I was feeling,” Sinkfield said. “It was all love. I just wanted to run over to [Moss] and hug him.”

“Hats off to our offensive coordinator Kyle Wilson for having the nerve to call that play,” Troup coach Tanner Glisson said.

Sinkfield was everywhere for the Tigers tonight. He started at wide receiver, cornerback and placeholder on extra points and field goal attempts.

“I’m going to play anywhere,” Sinkfield said. “I will play anywhere they want me to at the next level. I’m a ball player.”

Sinkifielf was the starting quarterback at his previous school and some players would sulk having to sit behind a player like Todd. Not Sinkfield.

“On almost any other team, he is the starting quarterback,” Glisson said. “He has played his role and hats off to him. He’s a phenomenal kid.”

The game was a back-and-forth affair with the Wildcats actually jumping out to a 7-0 lead on the first possession of the game when Ty Ellington took it in from one yard out. Troup answered with a Todd 89-yard touchdown run with less than a minute to go in the half.

“The only way to stop him is by calling the police and asking for help,” Whitewater coach Chad Frazier said.

The Wildcats came barreling back on the very next play with Corey Richardson taking it 73 yards to the house.

“We were doing the basic fundamentals well,” Frazier said. “We were blocking well. Running the ball well. Our running backs showed good vision and made some plays.”

The very first offensive snap on the following possession for Troup was a costly interception by Todd. It was the first of three turnovers for Todd who consistently found a way to bounce back in the game.

“He’s an unbelievable football player, and we are glad he’s on our team,” Glisson said. “I keep telling people that he’s a phenomenal football player and everybody should know that by now, but if they don’t they should recognize it.”

Whitewater took over in plus territory Logan Griffith finished the drive with a touchdown run to put Whitewater up 20-7.

The Tigers responded quickly. A Tray Blackmon 70 yard rush set the Tigers up in a goal to go situation. It was the Sinkield show on the final play of the drive as Todd hit him in the end zone for a touchdown.

Whitewater answered with a field goal to make it a two score game, but it would not last long. Todd hit Moss for a 78-yard touchdown on the next drive to make it 23-20. Moss came up clutch again with a 28-yard catch that helped get the Tigers final drive of the half moving.

“He’s an unbelievable player. He’s a college football player,” Glisson said. “He’s coming out of his shell and really making plays for us.”

Chris Moore nailed a field goal right before half to send the game tied at 23 into the break.

The Tigers received the ball to start the second half and marched right down the field until they faced a fourth and 10 from the 12-yard line. Todd worked his way outside of the pocket and delivered a dart to Qua Birdsong in the back of the end zone, who tapped a toe in bounds to give the Tigers their first lead of the game.

Whitewater fumbled the ball on the ensuing kickoff and the Tigers took over from the Wildcats 20-yard line and capitalized when Todd punched it in from one yard out for his fifth touchdown in the game.

“There were a lot of mistakes on both sides,” Frazier said. “I think the outcome is a reflection of the team that made the most mistakes. We turned the ball over leading to easy scores and had too many missed opportunities. We didn’t play our best, but hats off to those guys. They are a heck of a team.”

Griffith once again answered for the Wildcats as he took it in for six late in the third quarter to cut the Tiger lead to 36-30 going into the decisive fourth quarter.

A fumble by the Tigers set up the Wildcats in plus territory in the fourth quarter. The Tigers defense buckled down and only let up a field goal to keep their lead intact.

With their backs against the wall, Todd led a drive that ate up the majority of the rest of the fourth quarter and eventually ended in a storybook finish with Sinkfield connecting with Moss for a touchdown.

“I’ve been practicing and waiting for this moment,” Sinkfield said. “I didn’t even have a warm up. I was working on my receiver reps. I just trusted myself and trusted my team and the coach’s decision.”

“This is the first time in Troup history that we beat two teams ranked in the top-10 in a row,” Glisson said.

The path does not get any easier for the Tigers as they will take on no. 6 ranked Starr’s Mill on the road next Friday.