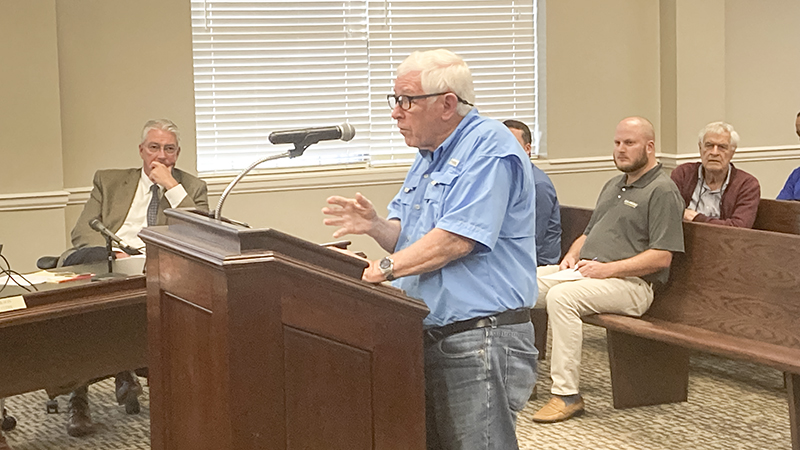 More than a dozen residents from the Wisteria Ridge subdivision attended Thursday’s city council meeting to show their concerns for a proposed development on Mooty Bridge Road.

Several residents spoke during a public hearing to receive comments on a Board of Planning and Zoning Appeals recommendation to rezone a portion of the former Newman property located off Mooty Bridge Rd.

Twelve-year resident of Wisteria Ridge, Bill Scarborough, spoke on behalf of the residents and stated the group is not against the proposed development, which is adjacent to their subdivision, but they have some concerns.

“I want to state upfront that this is in no way an attempt to protest this development,” Scarborough said. “We all realize its need as it relates to the future growth of our city. Our purpose today is to bring attention to various concerns we as residents have with certain aspects of the proposed development and hopefully seek a remedy prior to the final approval.”

Scarborough raised three primary concerns: buffers between the development and current homes, safety for current residents and increased traffic due to the new homes.

“Obviously, this created quite a bit of apprehension for some of the residents in those areas,” Scarborough said.

Scarborough also said the new development would be adjacent to 19 current homes, 11 of which are occupied by single retired adults. He asked that additional buffers be added for their safety.

As for traffic, Scarborough asked if the Georgia Department of Transportation (GDOT) would be able to make changes to cope with traffic added to the already busy Mooty Bridge Rd., pointing out that there are five subdivisions and numerous private homes on the road.

“Traffic is going to be a safety issue. There are 135 units going to be built,” said Wisteria resident Coleman Cody. “You’re looking at 1,600 to 2,000 additional cars coming out of practically one exit. That’s a problem.”

Scarborough said that they have spoken with the developers and city staff about the concerns and did receive a response with some possible solutions, but nothing definitive has been offered.

“We firmly hope that by working together, we can find a path that works for all of us. Today, the residents of Wisteria Ridge, appeal to the council, to hear our concerns to take them seriously and require that they be addressed before approving this project,” said Wisteria resident J.M. Rollins. “Once the approval is done, the developer will have no incentive to make any changes.”

Roger Cox, of Barge Design Solutions, said they have heard the concerns from Wisteria Ridge residents and intend to provide buffers but cannot commit to it at this stage.

“The owners have every intent possible to try to provide that buffer and maximize it where they can, but at the level of design that we’re at right now, it’s very, very difficult to put a finite number on that without imposing cost implications to one party or the other,” Cox said, unwilling to commit to any specific buffers due to cost concerns.

As for traffic concerns, Cox said traffic calming and intersection improvements were recommended for Mooty Bridge Rd. in the 300-plus-page traffic study that was completed.

Councilmember Mark Mitchell asked if the developers would be tied to the master plan submitted with the request.

“If we approve it as is, does that mean they can come in and switch from the commercial, and they could change that with apartments? Could that all be reversed?” Mitchell asked.

City Attorney Jeff Todd said that the developers would not be required to follow the exact master plan that was submitted.

Mayor Pro-Tem W.T. Edmondson reminded concerned citizens that they were not taking up the rezoning change until later, so they have plenty of time to voice further concerns and iron things out with the developer.

“I would like to have a lot of clarity from the developers as well as the citizens make sure that we get everything taken care of. We may not be able to hash everything out, but we can get most of their concerns,” Edmondson said.

The rezoning change would require two readings prior to a final vote, which could come as soon as Oct. 25.