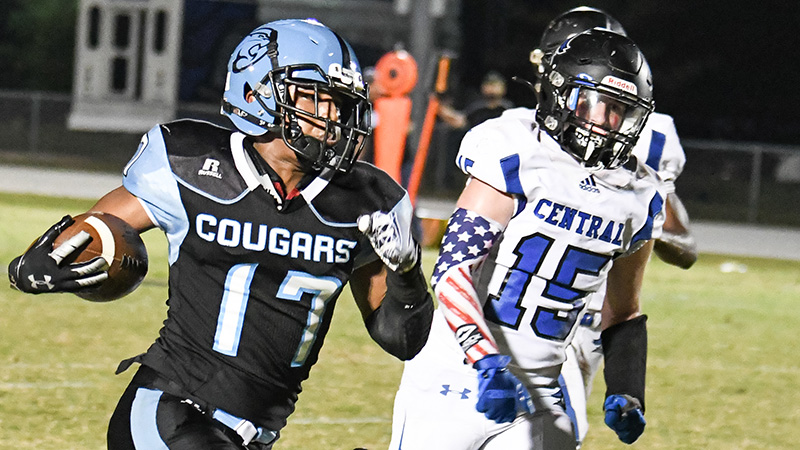 Home sweet homecoming. After a bye week and a road game over the last two weeks, the Lafayette Christian football team returned home and got back to winning ways with a 62-26 victory over Central Christian.

“We had some issues with our linebacker filling some holes early,” Lafayette Christian coach Jared Pike said. “We got that sorted out at halftime and overall it was a good win for us.”

Central Christian made it a nervy affair at halftime, but the Cougar defense came out swarming after the halftime break and pitched a shutout in the second half.

Unsurprisingly, it was Ephraim Snyder who got the party started with a 27-yard touchdown run within the first two minutes of the game. Snyder scored on a one yard touchdown late in the first quarter to make it 14-0 Cougars.

Andrew Hough hit Braden Firth for a 22-yard touchdown pass to make it 22-0 Cougars early in the second quarter. This was only Firth’s second game back this season and is still knocking off some of the rust as he had not played a game since last year before last week’s game.

“I think he’s still working off some of the rust,” Pike said. “He’s getting over some of the mental hurdles that come with having a major injury.”

It is a welcome sight to see for the Cougar fans as Firth’s big body can be used to bull smaller cornerbacks going forward.

After going up 22-0, the Cougars let Central Christian storm back into the game. Central quickly scored two touchdowns in the second quarter to cut the Cougar lead to 22-12.

The Cougars had a kickoff touchdown that got called back and Central was able to force a fumble and take it back to the house on the very next play to make it 22-18.

Alarm bells were ringing for the Cougar faithful on homecoming night, but there was no reason to fear as Snyder delivered them from evil with a 60-yard touchdown run that energized the home crowd with 4:01 left in the half. Central answered back with a long touchdown run of its own to make it 30-26. Once again, Snyder answered the call as he scored a touchdown from four yards out to make it 38-26 heading into the second half.

“Defense pitched a shutout and the offense scored 32 unanswered,” Pike said. “We had a much better second half.”

The second half started like the first half ended, with the Cougar offense rolling. Hough connected with Alex Tusing for a 35-yard touchdown. Tusing missed last week and was welcomed back this week as he played an integral role on offense and defense.

“He is one of our better players, and he’s a leader on the field,” Pike said. “It took a little while to get back to game speed. First half, he wasn’t quite there. After halftime he came out and I think he got back into game mode. He played the whole game and he needed to play the whole game to get back in shape. You can run all you want in practice, but game speed is a whole different type of deal.”

The Cougars asserted their command in the game when Snyder punched the ball in from 10 yards out for his fifth rushing touchdown of the game to make it 54-26 with 59 seconds left in the third quarter.

Freshman Brandon Davenport got the final touchdown for the Cougars with a four yard rushing touchdown in the fourth quarter.

“We are working Brandon in,” Pike said. “He’s Ephraim’s backup, and we wanted to get him some reps in the fourth quarter. He played well for being a freshman. He’s a big body, and he can move. I think he’s going to be really helpful for us in the future.”

“I don’t know if it’s a focus issue or what. We ran their offense all week and told them where the holes would be and how to run to them. Their offense was simple,” Pike said. “I tried everything. I’ve tried losing my mind and yelling at them and that didn’t work. I’ve tried being a little nicer and that didn’t work. They are going to need to watch some coaching expert or psychiatrist or something.”

Lafayette Christian improves to 3-1 overall. The Cougars will be back in action on the road to Fideles next Friday.

“We really needed that boost before starting to play these region teams,” Pike said.