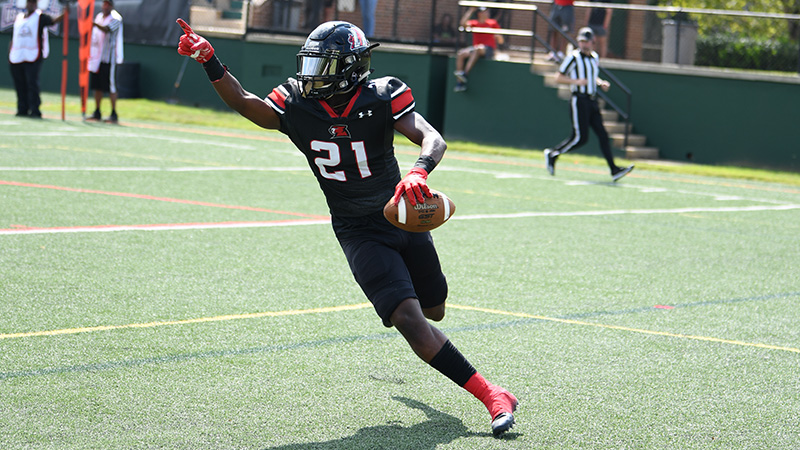 The LaGrange College football team toppled Ferrum 44-36 on Saturday to earn its first victory of the season.

“It feels unbelievable. I’m serious, it feels unbelievable,” Panthers coach Earl Chambers said. “I’m so proud of these kids, man. After all the things we’ve been through. Not playing the first game. Going up to Berry and making a bunch of mistakes. Having this opportunity is really good for [the players]. They deserve this.”

Over the course of 60 minutes, one play does not typically define a game. On Saturday afternoon it did. Shedrick Lindsey hit Eric Harris for an eight yard touchdown pass with 1:55 to go to give the Panthers their first lead of the second half. This was not the play of the game, however. The following snap after a penalty on the kickoff left Ferrum backed up inside their own 20 and saw Renardo Faust jump the route and take the interception back 16 yards for what ended up being the winning score of the game.

“I saw them running a crossing route and tried to trick me,” Faust said. “I just waited for the quarterback to throw the ball and jumped the route.”

This was not the only monumental impact play Faust had in the game. The Panthers were leading 38-35 late in the fourth quarter when the Ferrum defense forced a punt. JayDon Cooper came flying down the field and dislodged the ball from the returners hands and there was Faust to jump on the ball and get another crucial turnover for the Panthers.

Aubrey Carter scored on a 29-yard touchdown run on the ensuing drive to give the Panthers a 44-35 lead and just about close the game out. Ferrum kicked a field goal with less than 40 seconds remaining to cut it to a one score game, but could not recover the onside as the Panthers got the ball and sent their offense out in the victory formation.

The game was full of momentum plays and swings. Ferrum took a quick 7-0 lead in the first quarter before the Panthers came storming back and tied the game on a Lindsey 40 yard touchdown connection to Ajani Williams.

Lindsey was the offensive player of the game. He was unflappable in the pocket en route to going 18-for-32 for 220 yards and three touchdowns.

“He took command of our offense,” Campbell said. “He’s playing his best football that I’ve ever seen him play. I’m so proud of him. Him coming back for his fifth year option makes it that much sweeter.”

Williams ended the game with six catches for 89 yards and a touchdown.

Carter was one of the linchpins for the Panther offense as he finished the game with 101 rushing yards and two touchdowns on just nine carries.

Smiley scored two touchdowns – one on the ground and one receiving – to give Ferrum a 28-17 lead late in the second quarter.

Lindsey answered the bell again with a 35 yard touchdown strike to Jasharie Anders to cut the lead to one score going into halftime.

The Panthers defense came out inspired in the second half and limited Ferrum to just 10 points.

“Everything was self-inflicted in the first half,” Campbell said. “I told them if you wake up, you win. They came out in the second half and played better. We have a young defensive line and they are still learning how to play.”

Sophomore Isaiah Screen led the Panthers with 11 tackles while also forcing a fumble. Defensive lineman Hassan Tutson put on a clinic at the line of scrimmage and led the team with three tackles for a loss.

All-American tight end De’Queze Fryer had a bit of a quiet game after last week’s explosion versus Berry. Fryer finished with three receptions for 28 yards.

LaGrange College improved to 1-1 overall. The Panthers will host Methodist University next Saturday in their conference opener.

“We are going to keep fighting despite what the scoreboard says,” Campbell said. That’s who we are. That’s what a Panther is.”