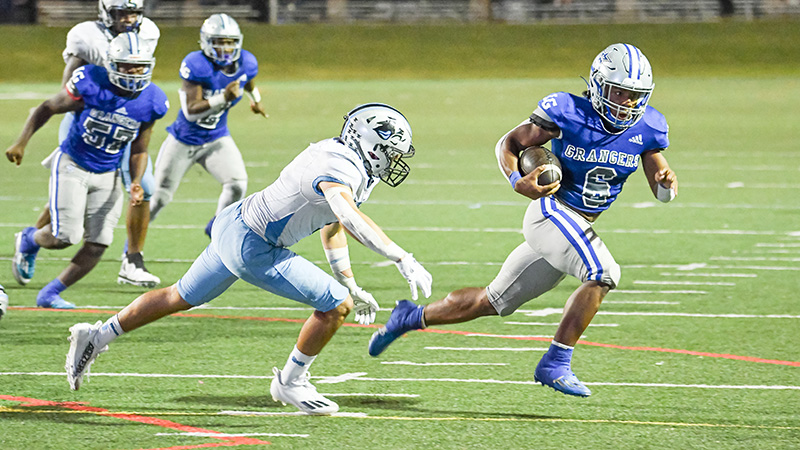 A game of inches. That is how Friday nights game between No. 10 LaGrange and No. 6 Starr’s Mill ended as the Panthers punched it for a two-point conversion in overtime to win 25-24.

Originally, the Panthers put out their special teams unit to kick the extra point but made a last second change after a timeout.

“We were thinking that at first that they were tired,” Starr’s Mill coach Chad Phillips said. “We called a timeout and my assistant coaches told me ‘we are getting four yards a carry, we can get this.’ We were tired too.”

The Panthers punched it in and stole a victory from the jaws of defeat.

“I’m proud of our kids,” LaGrange coach Matt Napier said. “It was two great football teams battling it out. They just made more plays than we did.”

Starr’s Mill took an early lead when it marched the opening possession right down the field and scored on an Anderson Cardoza touchdown run.

Denorayon Reid made a spectacular interception for the Grangers on the Panthers second drive to give the Grangers some momentum.

LaGrange drove the ball down the field and even got the ball inside the five yard line but had to settle for a field goal by Christian Ceja.

Reid was making plays on offense as well as he reeled in a 39-yard catch to set up the Grangers in plus territory. A Granger fumble at the Panther 22 yard line cost them a chance at more points.

The Panthers drove the final possession of the first half down to the Grangers 5-yard line using their methodical Wing-T offense to chip away at the Granger defense. The Grangers defense made a big stop with Reid getting a big pass break up on second down in the end zone.

The Panthers had to settle for a field goal and a 10-3 lead at the break.

LaGrange got the second half underway by driving the ball right down the field. The drive was aided by a facemask and pass interference call. The Grangers hit pay dirt when Jaylan Brown threw a dart to Jaylon Jordan – who high pointed the ball – in the endzone to get the score level.

A bizarre play happened on the following Panther possession as the punter’s knee hit the ground before he unleashed a booming punt which led to the Grangers taking over at the Panther 49 yard line. Magic Johnson took a wide receiver reserve to get the Grangers offense rolling on the possession. Brown bullied his way through multiple Panther defenders from a couple of yards out to give the Grangers their first lead of the game 17-10.

“He has unbelievable leadership. He kept making big time plays for us in big time situations,” Napier said. “He’s a veteran, he’s a leader, and he’s the captain of the football team. We expect nothing less from him in those moments.”

Starr’s Mill made another egregious special teams error when the returner called a fair catch on the one yard line.

“We overcame so much tonight,” Phillips said. “We overcame a fair catch on the one yard line. We overcame a punter with his knee on the ground. We did not play well at all so to beat a quality opponent, a playoff team like LaGrange, makes me so proud of our boys.”

The Panthers could get precious little going as they were backed up and gave the Grangers quality starting field position on their own 46-yard line. Reid proved clutch again as he caught a pass for 30 yards to get the Grangers on the cusp of the red zone. LaGrange got the ball down to the two yard line but decided to go for it on fourth down instead of kicking the field goal and making it a two score game. AJ Tucker got tackled at the line of scrimmage and the Grangers lead remained at seven.

“That was a massive goal line stand down there,” Phillips said. “How huge did that turn out to be.”

The Panthers offense was clicking before Marcus Jones made a diving interception for the Grangers with three minutes on the clock.

LaGrange took the opening possession of overtime and scored on the third play from the 10 yard line as Magic Johnson pulled a rabbit out of his hat and made a couple of defenders miss to get into the end zone.

The Panthers answered right back and snatched the win away on a touchdown and two point conversion.

“We have a bunch of warriors, and I’m honored to be their coach and go to war with them on Friday nights,” Napier said. “It’s even more evident on a night like tonight.”

“I’ve been at the program for 26 years and that is one of the top victories,” Phillips said. “Everything was going backwards for us, and they refused to lose. “

LaGrange dropped to 3-1 overall and 0-1 in region play. LaGrange heads to Whitewater next week.

“We want to come out on top regardless of who we are playing,” Napier said, “At this point, I’m not looking for moral victories. We want to win the football game.”

NOTE: rankings are according to GHSF Daily composite rankings for week four