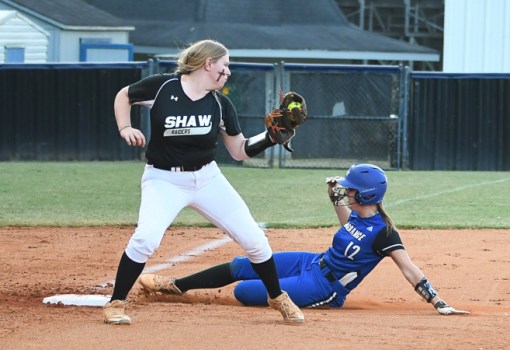 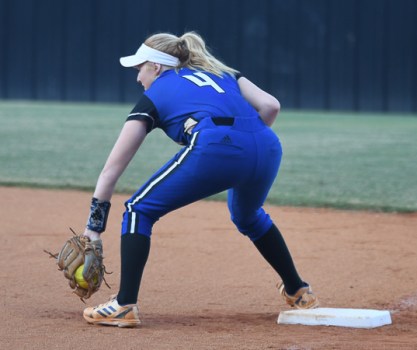 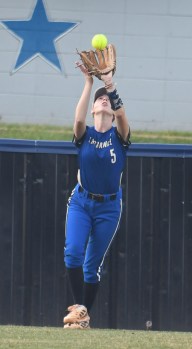 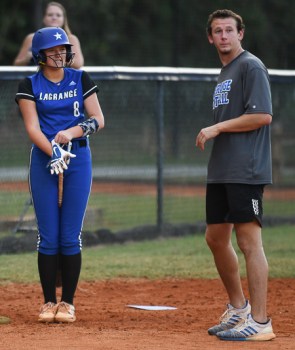 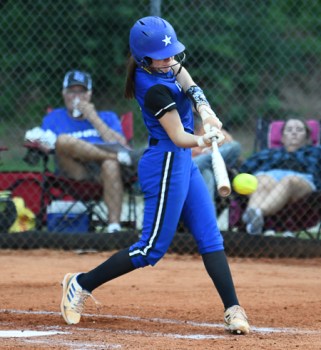 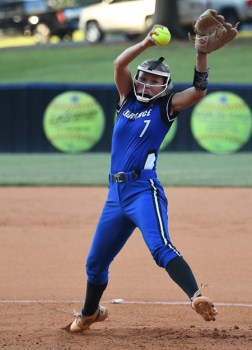 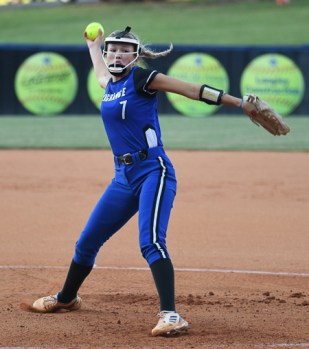 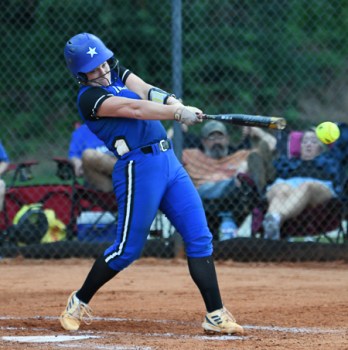 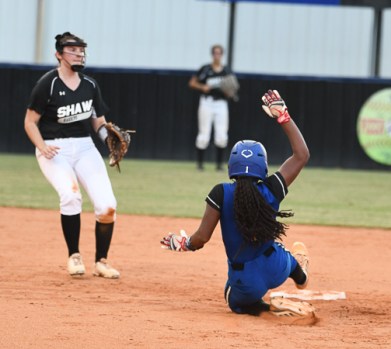 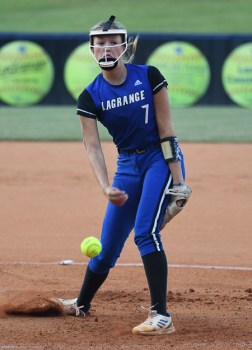 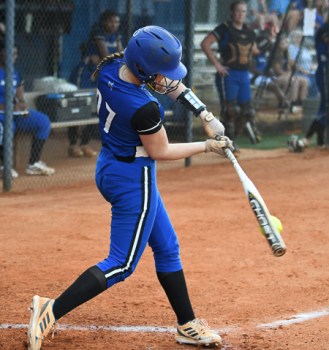 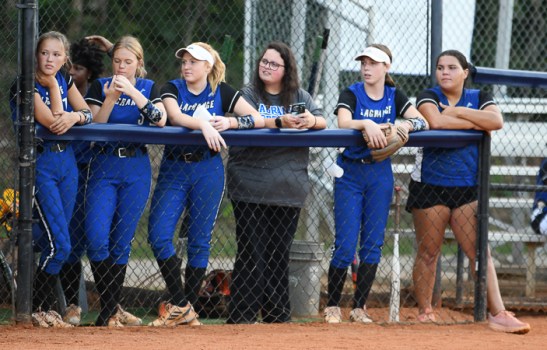 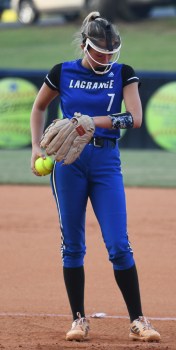 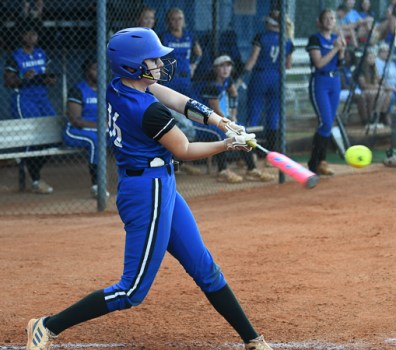 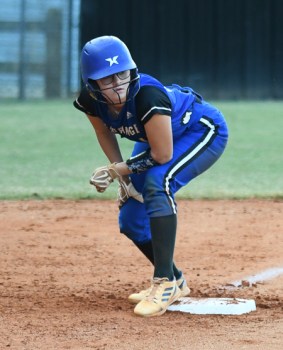 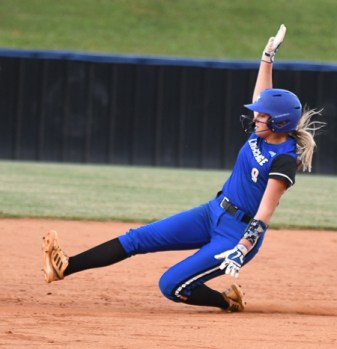 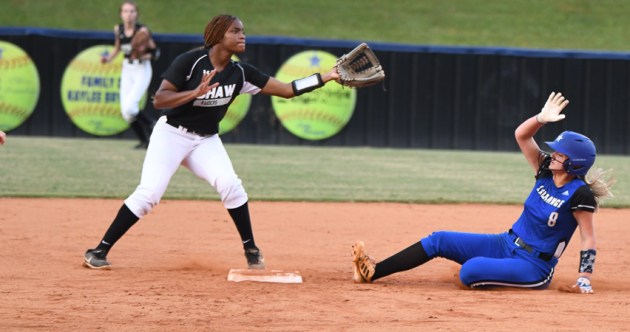 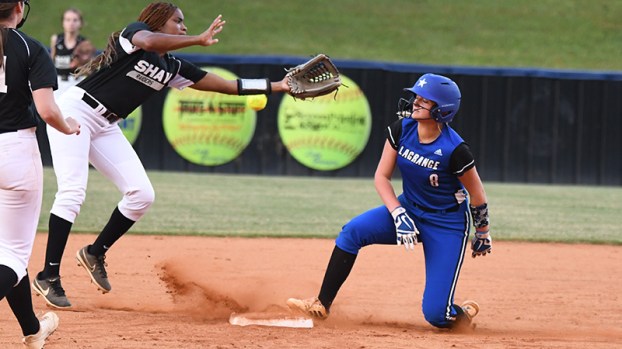 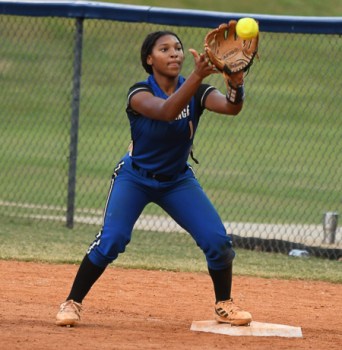 Back. Back. It’s out of here. Kimberely Reynolds blasted her first home in her high school career to propel LaGrange to a 11-3 win over Shaw on Monday.

“At first I thought, awe, it’s just a pop up,” Reynolds said. “Then, it kept going and going. I didn’t expect it to go out.”

It was jubilation as her teammates piled out of the dugout to greet her at home plate.

“I have seen the [power] before,” LaGrange coach Craig Mobley said. “I’ve been waiting for that moment to happen in a game. I’m super proud of her.”

Reynolds, a sophomore, was 2-for-3 with two RBIs and three runs scored.

The Grangers made relatively light work of the Raiders.

LaGrange scored in every inning, but the fourth as the offense was rolling all night.

Abby McGill got the action started when she drove in two runs on a single to left field. Tatum Nation followed with a ground out to push another run across the plate.

Jordan Street answered with a solo home run off Kaylee Foster in the top of the second inning to cut the Granger lead to two.

Foster  – the starting pitcher for LaGrange – remained unflustered and responded.

“Kaylee fought her tail off,” Mobley said. “She got better and competed. She’s getting better at handling those tough moments.”

Her teammates also had her back and scored two more runs in the bottom of the second. Tatiana Dudley scored on an error to get the offense rolling before Kaylee Bryant drove in her first run of the game on a single. Bryant has been on fire lately and was 4-for-4 in the game with an RBI and two runs scored.

The Raiders scored a run on an error in the top of the third inning to make it 5-2 LaGrange.

Once again, the Grangers answered, this time in the form of a Dudley RBI groundout and Shelby Siggers reaching home on an error.

Siggers, a freshman, has been hard to keep out of the lineup lately, going 2-for-3 with two runs scored on Monday.

The Raiders chipped into the lead in the top of the fifth inning before the Grangers scored four runs in the bottom of the fifth to end the game. Dudley earned her second RBI of the game when she grounded out to drive in Siggers.

Up stepped Reynolds, who hit a moon shot over the centerfield wall.

“This is special,” Reynolds said. “It’s a pretty big deal.”

Nation drove in the final run of the game for the Grangers on a single to left field. Nation was 2-for-4 with two RBIs.

LaGrange improves to 13-6 overall and is now riding a three game winning streak. The Grangers sit second in region 4-AAAA with a 6-2 record. The Grangers will play again on Thursday in a pivotal region matchup with third place team Trinity Christian who sits third in the region with a record of 5-2. LaGrange lost the first matchup 8-7 on the road in an eight inning thriller on Aug. 29.

“This was a good win,” Reynolds said. “We needed this win to get us prepared for Trinity Christian Thursday. They are a good team.”

The winner of Thursday’s matchup will have the inside on track to the no. 2 seed in the playoffs, which will ensure a home game in the opening round.