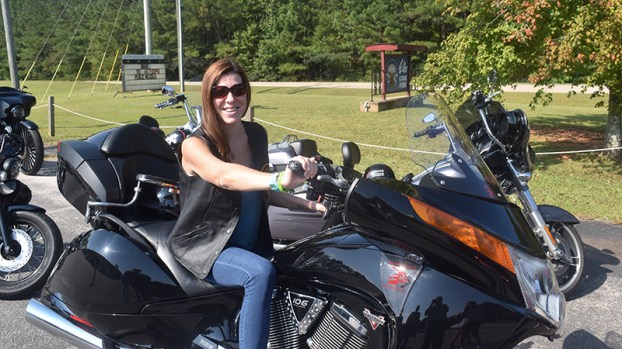 Local nurse Casey Duffield was diagnosed with a rare and eventually debilitating form of muscular dystrophy. The local Red Knights motorcycle club held a benefit ride in her honor on Saturday at the Elks Lodge to help raise funds for MD research. 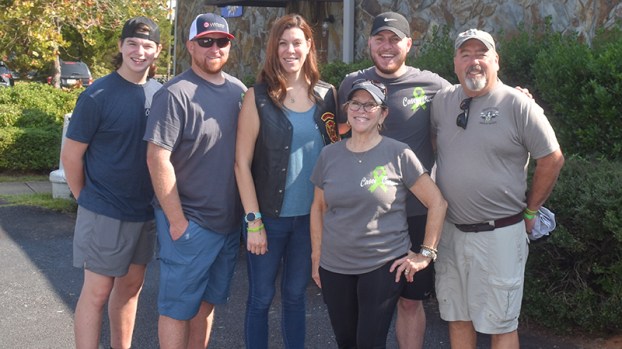 The second annual Ride for Casey’s Cure was held on Saturday morning at the Elks Lodge in LaGrange.

The motorcycle/jeep ride, which was organized by the local Red Knights motorcycle club, raised $1,500 toward muscular dystrophy research.

Funds from the ride will be used to help send local nurse Casey Duffield to researchers in Arizona to submit a second tissue sample. Duffield has an ultra-rare and eventually debilitating, fatal form of muscular dystrophy called Hereditary Myopathy with Early Respiratory Failure (HMERF).

Casey became a nurse to become a full-time caregiver for her father, who passed away from HMERF. Now she cares for others at Wellstar West Georgia Medical Center.

Casey initially thought she was safe when doctors told her the disease doesn’t affect women, but she began having symptoms after turning 30 and was later diagnosed with HMERF.

HMERF is so rare that only about a dozen people in the world are known to have it.

“I don’t know why there aren’t more of us,” Duffield said. “They all started getting symptomatic in their early 30s, and then they didn’t get diagnosed until the last several years.”

After Casey’s diagnosis, her family set up the Casey’s Cure foundation when they were unable to find any advocacy groups for HMERF. The goal of the nonprofit is to raise awareness about HMERF and raise funds for muscular dystrophy research.

Researchers in Arizona have requested a second tissue sample from Duffield to continue research on HMERF, which they believe might help find a cure for muscular dystrophy.

“That’s the hope we have about the information they gather from [my tissue sample],” said Duffield. “They’re trying to work on the genetic editing because that’s pretty much the only thing they can do. It’ll be able to be applied across the board.”

A total of 24 people (17 motorcycles and 2 trucks) participated in the ride to help bring Casey’s Cure $1,500 closer to their annual goal of $20,000. Casey’s mother and founder of Casey’s Cure, Chris Duane, advised that the group has raised about $2,000 for the year prior to the ride.

Donations can be made through their website at caseys-cure.org.

In addition to ride registrations, the event helped raise the funds through a 50/50 raffle and gun raffle.

Tickets to win a Smith and Wesson M&P handgun are still available for purchase through Oct. 30 at 7 p.m. Up to 100 tickets are being sold in the gun raffle at $50 each. Contact Josh Duffield at 848-992-1049 to purchase tickets or for more information.

Casey said events like the ride on Saturday give her hope that people care.

“It inspires us to keep to keep moving forward,” Duffield said. “It offers me hope that people care. That’s not always the case. That’s probably not what I should say, but hope isn’t always something that everybody has. So, it inspires me to continue having hope.”