Athlete of the week: Zoe Thompson has become the Grangers ace pitcher 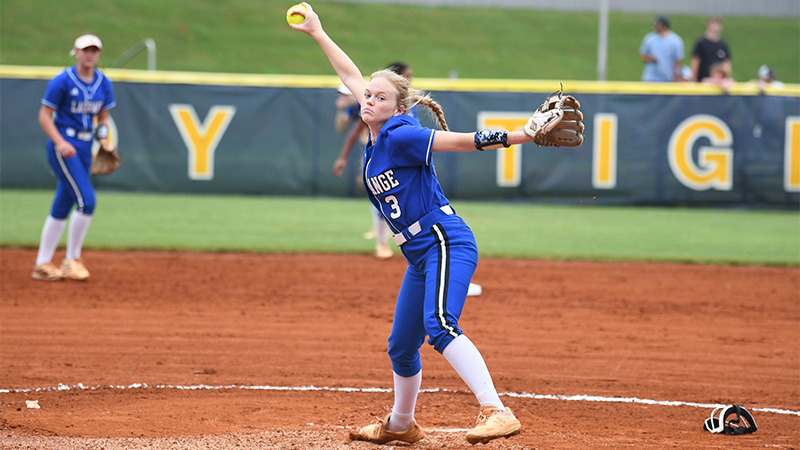 Excellence at such a young age.

Sophomore Zoe Thompson is turning heads with her dominant displays on the mound for LaGrange High this season. This all culminated in a complete game shutout against Troup that earned her athlete of the week honors.

“I love playing. All of them are fun, but it’s even better when you beat a rival,” Thompson said.

Thompson has been the crown jewel of the Grangers pitching staff despite being mostly a jv player a season ago. She is currently 7-2 on the season with an ERA of 1.74. She has started eight games while receiving playing time off the bench in an additional three games, something that does not bother her.

“It is pretty much the same to me,” Thompson said. “I do like starting games, but I have the same mindset either way.”

Thompson has 36 strikeouts on the season but is more of a finesse pitcher that forces weak contact from opposing hitters.

“Zoe is a finesse pitcher that works the count and gets a lot of contact early,” LaGrange coach Craig Mobley said. “She will get you out front and challenge you.”

Being a contact pitcher requires the player to have confidence in the defense behind them. Thompson places her trust in her defense because she knows that have her back and she has theirs.

“We have a really good defense behind us. They really back me up,” Thompson said. “I’m not a super fast pitcher, so I don’t always strike them out, but pitching more strikes causes them to put it in play and my defense makes plays behind me most of the time.”

Mobley also trusts Thompson in big moments. That’s something she finds extremely rewarding as just a sophomore on the varsity squad.

“I knew we were a young team, and I was going to have to step up,” Thompson said. “I would say I expected to get more opportunities this year, but you can never be prepared enough. “

She has seized those opportunities and run with them. She is solidly entrenched as the no. 1 starter on a team that looks bound for the playoffs. The Grangers are currently second in their region, and Thompson believes the team could be in for a big season the rest of the way.

“We didn’t have many goals at the beginning of the season, but we definitely have some bigger goals now,” Thompson said. “I think we can do really well in the playoffs.”

None of this happens without Thompson continuing to improve year round. She also plays travel ball which has helped her get reps and consequently get better.

“I feel like I’ve improved in my ability to throw more strikes, “ Thomson said. “I’ve learned how to make the batter work.”

On the flip side, Thompson has been getting more time as a batter. She is strictly being developed as a pitcher, but occasionally gets to swing the bat as well. She was 3-for-3 with three runs scored and five RBIs in a region game versus Riverdale last week.

“It’s weird because I never hit on varsity,” Thompson said. “I don’t love hitting because it makes me nervous. I get really nervous hitting, but don’t ever really get nervous pitching. I’m more confident in my pitching abilities.”

Thompson will likely get the starting nod in a pivotal region game on Thursday against region foe Trinity Christian. She will be suiting up for the Grangers for the foreseeable future as well.
“Being a Granger definitely has a lot of pride behind it,” Thompson said. “It definitely means a lot to me and all my teammates.”