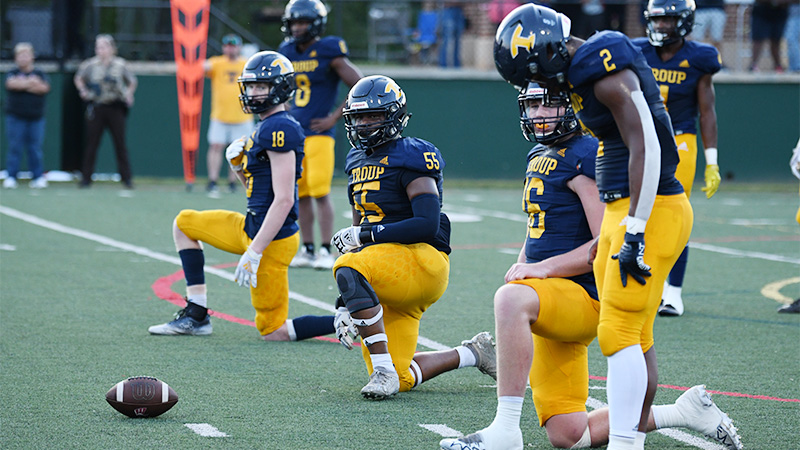 The no. 4 ranked Troup Tigers are in for a monumental clash on Friday against the no. 5 ranked Starr’s Mills Panthers. Both teams are coming in off massive week one region wins.

“It’s big, there is no doubt about that,” Troup coach Tanner Glisson said. “Both teams are 1-0 and are going to be fighting for playoff positions. It’s going to be a big matchup.”

Troup comes into the game 4-0 overall and 1-0 in the region. The Tigers are rolling after their biggest win of the season last week with a 43–33 victory over Whitewater.

It was another monster performance for junior quarterback Taeo Todd who is one of the best players in the AAAA classification right now. He was 7/16 for 169 yards and three touchdowns in the air while adding 23 carries for 247 yards and two touchdowns on the ground. He did have three turnovers last week but always found a way to respond.

“He’s tough. He’s got character,” Glisson said. “He’s a hard-nosed, tough football player. He’s got to help us by eliminating the turnovers.”

Todd’s season statline might cause a double take because it seems so absurd. Through four games, Todd is 37-for-64 for 633 passing yards and eight passing touchdowns while also having 62 carries for 696 rushing yards and 10 rushing touchdowns.

Todd is not the only Tiger putting up big numbers. Receiver Qua Moss is averaging 31 yards a reception and has 310 yards and four touchdowns to lead the Tigers receiving core.

Logan Sinkield had two catches for 22 yards and a touchdown last week and also threw the game sealing touchdown to Moss on his only pass attempt of the game. Sinkfield also showed out on defense from his cornerback spot. The do-it-all player has been making a big impact on the Tigers so far this season.

“We love him,” Glisson said. “He came to us late in the spring, and we didn’t get the opportunity to work with him as much as some of the other players. We are learning what he can do at different positions.”

The Tigers are led by four star safety Noah Dixon and four star defensive lineman Qua Birdsong. Birdsong was moved around last week against the Whitewater offense and will likely be utilized in similar ways this week against a similar offense in Starr’s Mill. Birdsong also showed his versatility by catching a pass and dragging a toe for a big touchdown against Whitewater.

Starr’s Mill runs the same sort of offense that Whitewater ran last week (Wing-T) with a few different wrinkles. Having these two offenses back-to-back helps the Tigers adjust to that kind of offense.

“I think it’s good to get that experience in back-to-back games,” Glisson said. “On the flip side of that, those guys at Starr’s Mill have some video to go off of and see where we may be weak in some areas against that type of scheme. It’s a cat and mouse game.”

Starr’s Mill comes into the game 4-0 and 1-0 in region play. The Panthers earned a hard fought 25-24 victory over LaGrange last week in overtime on the road. This time, the Panthers will be at home.

“We don’t get a chance to play on the road at somebody’s home field very much,” Glisson said. “Thinking back to last year, the Columbus teams all played in city stadiums. This is a big challenge for us, and they are going to have a great crowd.”

The Panthers are led by Chad Phillips, who has been with the program for over 25 years. Starr’s Mill finished the 2021 season 8-4 overall and lost in the second round of the AAAAA playoffs. The Panthers beat Union Grove 34-25 before falling to Clarke Central 24-7.

The game will be at Starr’s Mill with kickoff set for 7:30 p.m. on Friday.

NOTE: Rankings are according to week 5 AJC Poll