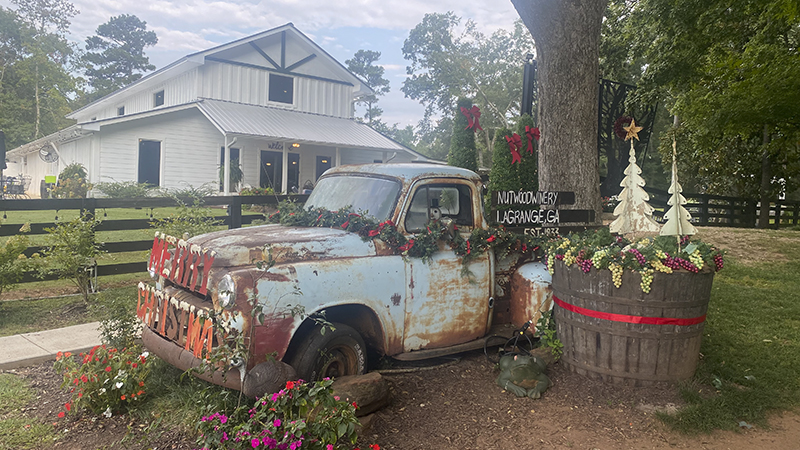 Filming continues for the Christmas romantic comedy being filmed at Nutwood Winery and other locations around LaGrange.

The film stars Ansley Gordon and Chris Connell. The movie is being produced for television distribution by Executive Producer Vanessa Shapiro of Nicely Entertainment. The film is being produced by Danny Roth and directed by Dave Thomas for an expected 2023 release.

The production team of about 25 also includes Cinematographer Thomas Hennessy.

The holiday movie is tentatively titled “A Perfect Christmas Pairing” based on its winery setting. The made-for-TV movie is expected to be shown in about 26 countries, but a U.S. channel hasn’t been set.

Creative Executive Producer Dave Hickey advised that Shapiro was looking for a holiday movie and suggested a vineyard-themed Christmas movie.

Hickey said he was shooting another movie in Atlanta at the time and he heard about Nutwood Winery in LaGrange. When Shapiro saw photos of Nutwood, she immediately sent him down to meet with the owners, Neil and Trish Liechty.

After hearing some of the history of the property and their getting into winemaking, the filmmakers decided to inject some of their background into the story.

“Our story originally was set in Seattle, so once we decided on the setting, and Neil and Trish were so great, we decided to kind of make this their Christmas movie,” Hickey said. “We’re going to reset this to be set in Atlanta and LaGrange, use their real names and real local business names.”

Hickey explained they had all different names for the characters and the vineyard. Everything was completely different, and he had the writers go back and change things to fit.

Neil and Trish later introduced Hickey to several business owners around town, who agreed to allow their businesses to be used as filming locations.

The Liechtys agreed to let the producers film at the winery at no charge since they are filming when the location would normally be closed.

“I don’t need money for using the site, but I told them I would like to use the town names because I believe in this town,” Neil said.

“We’re using C’sons. We’re using Karvelas. We’re actually using some pizza boxes from Karvelas in the scene we are filming right now because it’s supposed to be the morning after a pizza party,” Hickey said.

The filmmakers have already shot at Plum Southern and plan to use several other locations around LaGrange including Pretty Good Books, Emberglow, Café Brulee and Lafayette Square.

The community is also invited to participate as extras in the movie. For those interested in being in “A Perfect Christmas Pairing” visit https://tinyurl.com/369sy4rp.