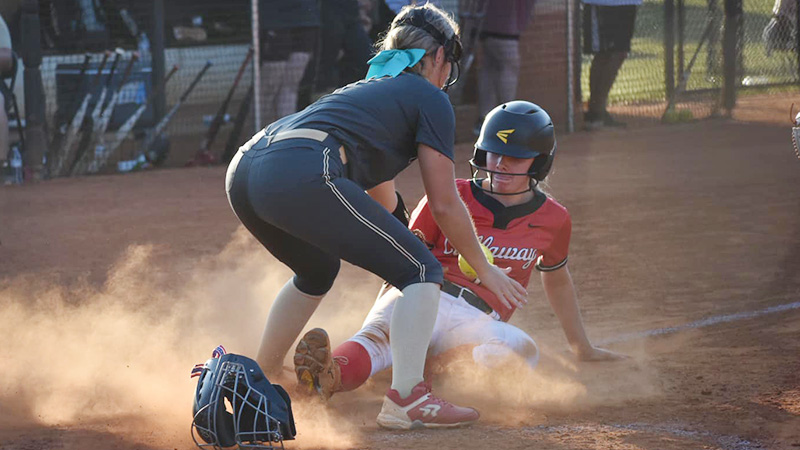 The margin between victory and defeat can be a very thin line. For Callaway, it was a fine margin in a 7-5 defeat to Temple on Thursday.

The Cavaliers entered the top of the seventh inning trailing 7-5. A walk by Mackenzie Rhodes and a single by Emma Bryan put the Cavaliers in business. Ava Shuford then took a walk with one out to load the bases. A runner was tagged out at home on the ensuing play before a pop up ended the chances of a Cavalier comeback.

How the teams got to the seventh inning:

Temple jumped on the Cavaliers early with five runs in the first inning, but Callaway battled back. Kaitlyn Williams drove in a run in the second inning to cut the Temple lead to four.

Callaway was not done there. Savannah Rice scored on a passed ball before Bryan delivered an RBI single to cut the lead down to two runs.

Kylah Harris scored on a passed ball to cut the Temple lead down to one in the top of the fourth. Temple answered with a run in the bottom of the fourth to take a two-run lead.

Bryan came up clutch once again and delivered an RBI single to cut the Temple lead back to one in the top of the fifth inning.

Bryan was the steady had on offense, going 2-for-4 with two RBIs

Temple retook a two-run lead in the bottom of the fifth and held on for the victory.

Mackenzie Toney got the start for the Cavaliers and pitched a complete game. She allowed 10 hits and five earned runs on seven strikeouts.

Callaway drops to 10-10 overall, but this game had no effect on its 8-1 region record. The Cavaliers are second in region 5-AA and are on track to host a playoff game. Callaway has a home region game scheduled for next Thursday against McNair.