Looking for a rebound: LaGrange eyes a big win on the road against no. 8 Whitewater 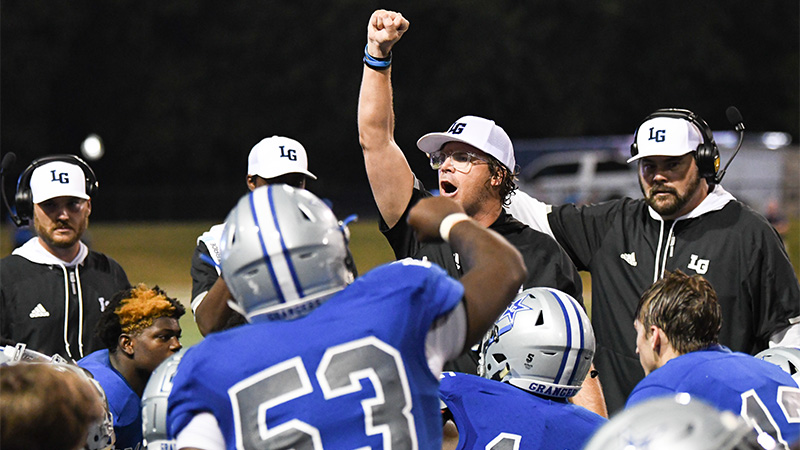 LaGrange is in for a second straight game versus a top ten opponent in AAAA when the Grangers travel to take on no. 8 Whitewater on Friday.

“We got a big game each week,” LaGrange coach Matt Napier said. “Whitewater is a well coached team with some tremendous athletes. Just like Starr’s Mill, they will be ready for a big time game.”

The Grangers are coming off their first loss of the season, losing to Starr’s Mill 25-24 in overtime. The narrow loss snapped a three game Granger win streak, but it did not snap their spirits as they look to battle back and get a big win on the road.

“We talk about adversity and having setbacks,” Napier said. “We knew each week was going to be a battle. There are lessons to be learned and I’ve been really pleased with how guys have responded. We had really good focus last week and a really good week of practice and this week has matched that.”

LaGrange will be down one of their best players through the opening four games – running back Malachi Fannin-Render broke his collarbone and may not be able to play again this season.

“It’s a big deal. He’s a special player,” Napier said. “I’ve coached a lot of really good ones, but he’s probably one of the best 10th graders I’ve ever coached. He’s very talented, but what outweighs his talents is his work ethic, his commitment and his fighting spirit. He’s hard to replace. Fortunately for us we have two other guys that have been getting reps and playing well and our team has confidence in them.”

“I’m looking forward to seeing him take advantage of that,” Napier said. “He started every game for us last season.”

Another player that will be looked upon to shoulder some of the load is sophomore Jonathan Keys. He has seen an expanded role in recent weeks.

“He has shown some ability to be a really special player for us,” Napier said.

Keys’ best game came in game three against Upson-Lee where he carried the ball five times for 74 yards and two touchdowns. Keys has 15 carries for 115 yards and three touchdowns on the season.

The offense will also feature two major pieces in wide receiver Magic Johnson and quarterback Jaylan Brown. Johnson leads the team in receptions (13), receiving yards (293) and receiving touchdowns (3). Brown has been clinical passing, going 24-for-36 for 495 yards and six touchdowns through the air with no interceptions. He also has 29 carries for 115 yards and five rushing touchdowns.

“[Brown] has been awesome,” Napier said. “You think about all the big time plays he made last game out with his arm and his legs. He was extremely accurate. His work ethic has been tremendous.”

Brown went 9-for-15 for 154 yards and two passing touchdowns last week against the currently ranked no. 5 teams in AAAA (Starr’s Mill). He also churned out 47 yards and a rushing touchdown on 14 carries.

Whitewater is also entering the game having lost its first game of the season last Friday. The Wildcats lost 43-33 to the no. 4 ranked Troup Tigers. Logan Griffith will be one of the key players for the Grangers to slow down as he was churning out yards last week and scored two touchdowns on the ground. The Wildcats run a similar Wing T offense to last week’s opponent, Starr’s Mill.

“I think it’s a catch-22,” Napier said. “They know how we’ll defend the Wing T so we have to have a slightly different approach each week. They run a similar type of offense so this will give us a chance to learn from some of the mistakes we made.”

Whitewater is in its first season in AAAA after being in AAAAA previously. The Wildcats went 11-2 last season and made it all the way to the quarterfinals where they lost 20-13 to Creekside.

This will be only the Grangers second road game for the season and the first since week one away to Smiths Station. The winner will be 1-1 in the region while the other will fall to 0-2 and have to play clinical football the rest of the way to get into the playoffs.

NOTE: Rankings are from the week five AJC poll