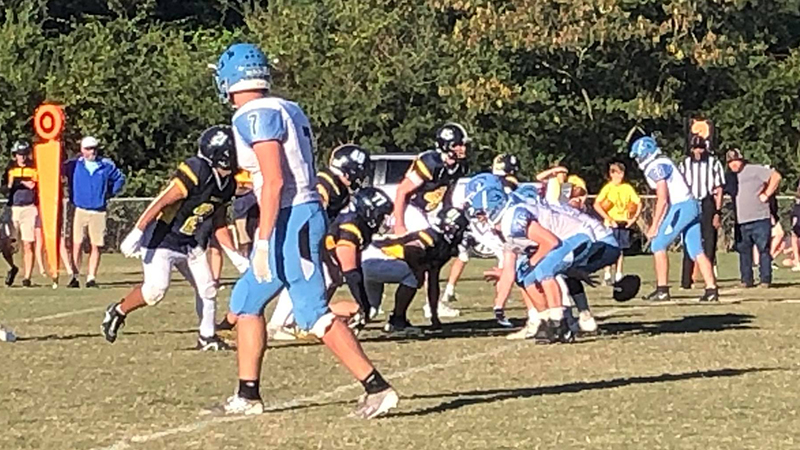 A late rally for Lafayette Christian fell just short on the road as the Cougars fell 18-12 to Horizon on Friday.

The Cougars were without starting quarterback Andrew Hough (illness), and it showed on the field as Alex Tusing had to be moved over to quarterback because the Cougars backup – Paul Bastini – was also nursing an injury heading into Friday night’s game.

Moving Tusing to quarterback hurt the Cougars offense on the outside as Tusing is the team’s no. 1 receiver and no. 2 running back so it left the Cougars shorthanded in multiple departments.

The Cougars were facing a 6-0 deficit heading into the second quarter after Horizon scored a touchdown after a turnover by the Cougars. Horizon got a big touchdown pass with 6:35 left to go in the first half to take a 12-0 lead.

Tusing had a massive interception late in the second quarter, but the Cougars could not capitalize and had to settle for a 12-0 deficit at the break.

“The first, second and third quarter really hurt us,” Pike said. “It put us in a position to have to make a crazy comeback,”

The third quarter was a bit of a stalemate, but Horizon was able to score a passing touchdown on a fade route on the first play of the fourth quarter.

The Cougars pride was hurt, but their spirit was not broken. Ephraim Snyder scored a rushing touchdown from a yard out before Tusing hit Braden Firth on a long touchdown pass to cut the Horizon lead down to just six points (18-12) with 2:56 left in the game. The Cougars recovered an onside kick to breathe some life back into the Lafayette Christian sideline.

“I feel like we had a chance,” Pike said. “We drove the ball down to the Horizon 40-yard line with about 45 seconds left. Alex dropped back and threw a dart as the kids say, but it fell off the receivers hands at about the 3-yard line. We put ourselves in a good position at the end of the game.”

Those are the fine margins between winning and losing and the Cougars were on the wrong end of the stick on Friday night.

While the offense was a bit lethargic with all the shifting personnel, the defense came to play. The Cougars were going up against their first high profile passing attack on the season. The Cougars adjusted from their usual run stopping scheme to a defense more orientated in neutralizing an aerial attack and it worked wonders.

Cal Evert was the standout defensive player for the Cougars as he had three sacks on the opening Horizon possession as well as a blocked PAT.

A freshman Cody Bastini started in the secondary because of Andrew Hough missing the game and was able to reel in his first career interception in the game.

Lafayette Christian fell to 3-2 on the season. The Cougars will open up region play on the road at Fideles next Friday.