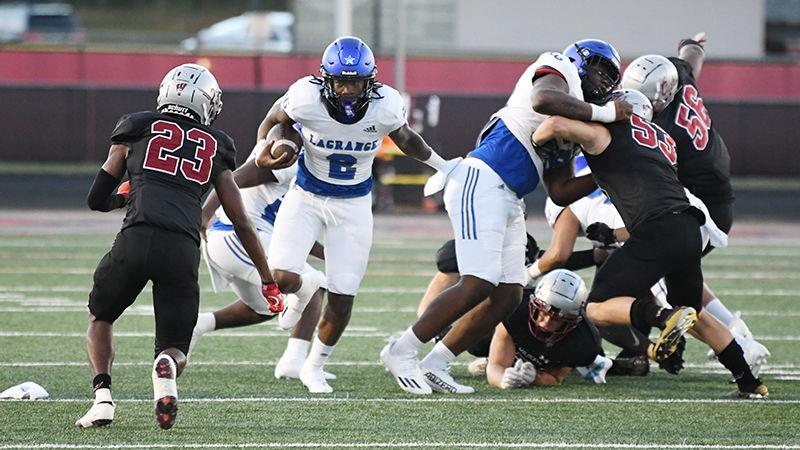 LaGrange’s comeback rally on the road against No. 8 Whitewater fell just short as the Grangers had to settle for a tough 29-21 loss on the road. It was a tale of two halves as LaGrange was dominated in the first half before coming out in the second half and outplaying the Wildcats on their home turf.

LaGrange got the ball first but could not sustain a drive and was forced to punt. Whitewater took over at its own two yard line but marched down the field and scored a touchdown on a 66-yard rush. Whitewater also punched in a two-point conversion to take an 8-0 lead in the game.

The Grangers had an answer in the form of a 73-yard touchdown pass from Jaylan Brown to Jaylon Jordanm who was streaking wide open down the middle. Brown dropped a dime in the bucket and Jordan walked into the end zone for six points. The Grangers kicked the extra point courtesy of Christian Ceja. The one point deficit would be the closest the game got outside of the opening stages of a scoreless game.

Whitewater answered right back with a touchdown to take a 15-7 lead. LaGrange could not answer and a shanked punt gave the Wildcats the ball on the Grangers 39-yard line. LaGrange’s defense buckled down and forced the Wildcats into a turnover on downs.

The Grangers could not capitalize on the potential swing in momentum as Brown threw his first interception of the season. The Wildcats scored on a 36-yard touchdown pass on the ensuing offensive possession to put the Grangers in a big hole.

The Grangers fought hard the rest of the way and got themselves back in the game.

The Grangers got the ball first and goal and Brown was able to punch the ball in from two yards out to give LaGrange life late in the game. The Grangers could not recover the onside kick, but the defense tightened up and was able to get the ball back for the offense.

The Grangers had the ball deep in their own territory and drove down the field. With 2:28 on the clock, AJ Tucker punched the ball in from two yards out to cut the score down to one possession. Once again, the Grangers could not come up with the onside and once again the defense bailed them out to give the offense a chance late in the game.

Brown’s hail mary at the buzzer fell to the turf as the Grangers took their second loss in as many weeks.

The Grangers offense clearly missed the explosive ability of Malachi Fannin-Render who is out indefinitely with a broken collarbone. Fannin-Render was arguably their offensive MVP through four weeks and the Grangers leading rusher was sorely missed on Friday.

LaGrange fell to 3-2 overall and 0-2 in region play. Both losses have come against top 10 teams in AAAA.

The Grangers will look to respond next Thursday as they host region opponent Riverdale who are 3-3 overall and 2-1 in region play.