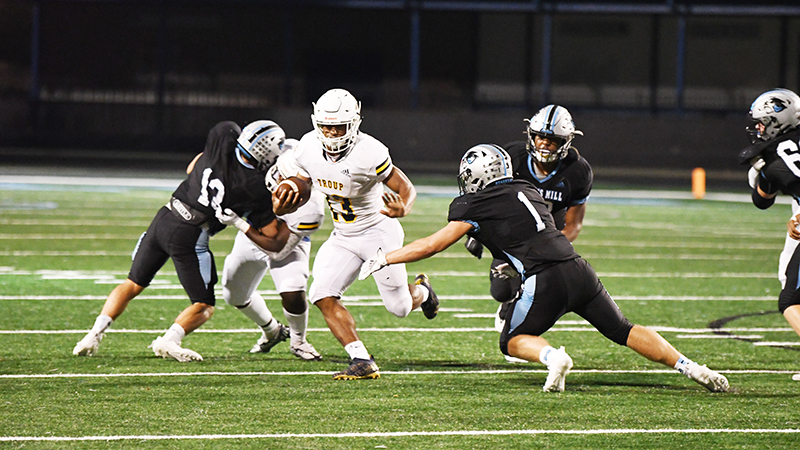 Another game, another win over a top-five AAAA opponent for the No. 4 Troup Tigers who beat the No. 5 Starr’s Mill Panthers on Friday night.

“We had such a clean game,” Troup coach Tanner Glisson said. “We had no turnovers and few penalties and our defensive guys were in the right holes and our offensive line stayed within the blocking schemes.”

The Tigers were rolling early and got out to a quick 8-0 lead after Taeo Todd hit Noah Dixon on a short touchdown pass and the Tigers punched in a two-point conversion. Todd was not done there as he hit Logan Sinkifeld ­– who started the game at running back, but was moved all around on offense – for a touchdown and the Tigers jumped out to a quick 15-0 lead.

“Coach Wilson puts [Sinkfield] in a tremendous position to make plays,” Glisson said. “Moving him around creates a lot of mismatches, but Sinkfield has to go out there and execute, and he did tonight. There is no telling where he will be next week.”

Starr’s Mill answered with a 26-yard field goal late in the first half to try and steal some momentum going into the break.

It did not work.

The Tigers received the opening possession of the second half and drove it right down the field with Todd hitting Malikih Poythress for his third passing touchdown of the game.

“We challenged [Todd] to make gains (with his throwing),” Glisson said. “He has really done well buying into what we are trying to do and you can see he has improved.”

With the Tigers up 23-3 in the third quarter, the Panthers drove the ball down the field. The Tigers forced the Panthers into a fourth down, but an 11-yard touchdown strike on a blown coverage gave the Panthers a little bit of life.

“We had a bust down there that led to some trash points, but the defense played really well,” Glisson said.

That it did, as the defense neutered a potent Panther rushing attack. The Panthers got little going on offense until late in the game when the lead was practically insurmountable.

“I loved our defensive effort tonight,” Glisson said. “I think we did more than slow them down. They were really physical at the point of attack and limited any explosive plays.”

The Tigers had an answer every time it looked like Starr’s Mill might be able to pull off a late rally. Todd returned the kickoff 55 yards and then promptly scored on a 45-yard touchdown rush on the next play. Todd was not done there as he scored on a 50-yard rush early in the fourth quarter to put the game out of reach.

“He’s as good of a player as I’ve ever had,” Glisson said. “I have had some damn good ones, and he is as good as any.”

The Panthers scored late in the fourth on a 21-yard passing touchdown to make it 37-17, but it had little impact on the final outcome. After the Tigers recovered an onside kick attempt,

Tray Blackmon hit the Panthers with the knockout blow on a 32-yard rushing touchdown late in the fourth quarter.

The Tigers got to line up in victory formation again this week as they took down their third straight team ranked in the top 10 of its respective classification. This is the first time in Troup history that they’ve beaten three straight top 10 teams.

Troup improves to 5-0 at the halfway mark of the season. The Tigers are 2-0 in region play with wins over top 10 opponents ­Whitewater and Starr’s Mill. Troup will be back in action next week when the Tigers take on region foe North Clayton at home next Friday.