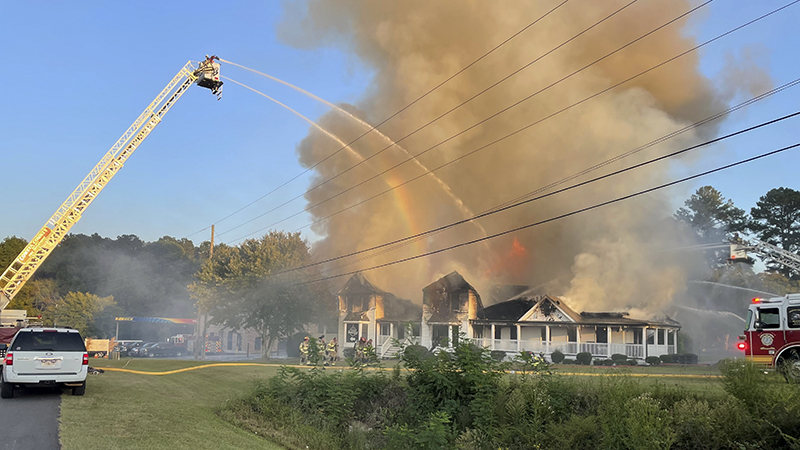 The Sharpsburg home of a bakery planning to open a new location in LaGrange was destroyed in a fire Wednesday evening.

Heirloom Market Co. and Bakeshop, who have made plans to open a shop in LaGrange near the LaGrange Mall on Lafayette Pkwy, lost their original home in a manner of hours.

The historic building that housed the bakery at 8861 GA Highway 54 in Coweta County went up in flames on Wednesday.

Coweta County firefighters responded to the scene around 6:11 p.m. and spent most of the evening getting the fire under control, according to Coweta County Communications Manager Cathy Wickey.

Coweta Fire Chief Robby Flanagan said firefighters arriving initially began making sure everyone was evacuated. They soon realized the fire was much larger than initially thought and began a defensive operation.

No injuries were reported as a result of the fire.

After the fire was brought under control, county fire rescue and the sheriff’s office remained onsite to monitor the location throughout the night.

“We appreciate the support of the Georgia Mutual Aid Group that assisted us during this time. The Fire Marshal will now work with the state to determine the cause,” Flanagan said.

The fire was called a major loss by fire officials.

Fire officials have confirmed that the fire appears to have originated toward the front of the building, but the official cause of the fire is still under investigation.

The building was a local landmark and was constructed in the 1960s, according to the Newnan Times-Herald. Heirloom Market Co. and Bakeshop had been at the location since 2019. The bakery has another location in Newnan.