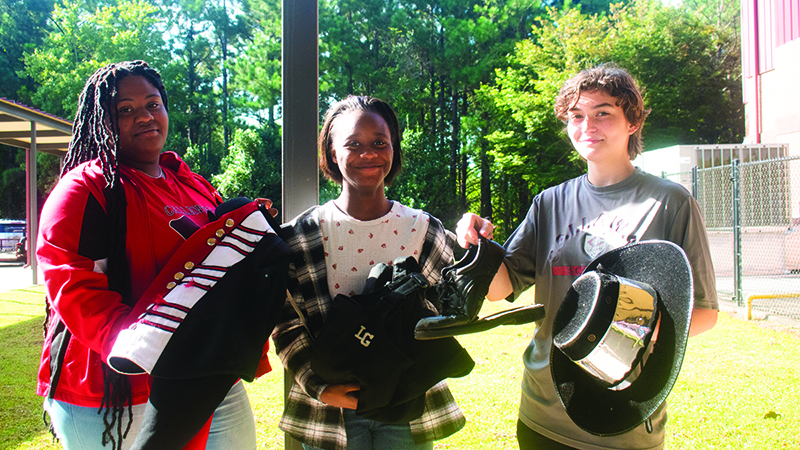 According to band director Tony Daniel, the Cavaliers’ old uniforms had been donated to Callaway High nine years ago by LaGrange High, and the Grangers had bought them 20 years ago. Many of the uniform jackets had a large gap where the LHS symbols was once sewn in, while the pants still had LHS stitched into them.

Band uniforms typically have a shelf life of approximately 10 years but still need occasional maintenance to make them last.

“I think the uniforms ended up costing us about $35,000 total,” Daniel said. “With the matching funds from the Callaway Foundation, we were able to pay off the cost right away. It was pretty exciting because a lot of times you get stuck with these bills where you can only pay a certain amount at a time but through the efforts of our booster program, they raised enough money and with the foundation matching we were able to pay up front.”

The band formed its booster club in 2020 and has held fundraisers like car washes and selling turkeys to raise funding.

Before getting the new uniforms, the instrumentalists had to make quick decisions to fix uniform malfunctions, such as supergluing the brims of hats together, wearing old band shoes, safety pinning zippers in place and using packing tape on instruments to keep them together.

“To get new uniforms is almost like a renewed sense of excitement,” Daniel said. “I tried to infuse some excitement into the program coming in here from the middle school and added new stand tunes, new drum coverings and more.”

Until the new uniforms came in, the band was wearing shorts and a T-shirt for performances.

“When you’re wearing hand-me downs, sometimes you feel like you’re not that good of a group and by them putting those uniforms on, it was like all of a sudden their sound changed, their energy level changed — you could see a big difference in the kids,” Daniel said.

With the funds raised by the booster club, the Cavaliers were able to buy a new trailer, new instruments and new color-guard flags.

“We wanted to find something that would kind of generate ownership,” Daniel said. “Being owners of new uniforms, the kids are excited to have a trailer that has their name on it, that shows that it belongs to them.”

“When we were raising that money, we wanted to find something that would give would kind of generate ownership,” Daniel said. “Being owners of new uniforms, the kids are excited. It just really energized the group.”