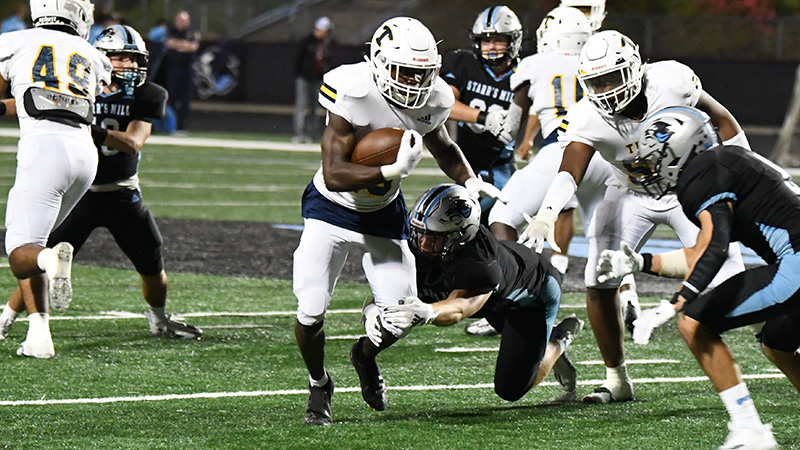 The no. 4 Troup Tigers are riding high heading into homecoming after three straight wins over opponents ranked in the top 10 in their respective classifications.

After that brutal stretch of games, the Tigers should have it a bit easier this week against a 1-5 North Clayton team.

“I don’t want to say we are taking it light this week, but we are changing our focus to other things to get some stuff cleaned up,” Troup coach Tanner Glisson said. “We haven’t been pounding each other in practice quite as hard as we have the last two to three weeks. The guys are still upbeat and hungry.”

North Clayton got a 21-20 win over KIPP Atlanta Collegiate in week two, but every other game has been a struggle for them. The Eagles sit at the bottom of region 4-AAAA and have been outscored 232-34 in three region games so far this year with their closest game being a 34-0 loss to Fayette County.

“I’m sure if you look at it on paper we have the upper hand, but when you are in our position, you’re not worried about North Clayton, you are worried about playing ourselves,” Glisson said. “If you go out there and worry about the scoreboard, you can get in a little trouble.”

Taeo Todd has been the heartbeat of this Tigers team, and was dominant once again in last week’s 44-17 drubbing of no. 7 Starr’s Mill. Todd was 8-for-10 for 138 yards and three touchdowns while tallying 18 carries for 196 yards and two touchdowns on the ground. The biggest stat: 0 turnovers after he had three in the previous game against Whitewater.

“There were some things we addressed with Taeo and some of the other offensive guys about ball security and how we were handling the ball,” Glisson said. “To Taeo’s credit, he fixed it faster than I ever thought he would.”

Todd is now up to 771 yards passing with 11 touchdowns and 892 yards and 12 touchdowns on the ground to lead the Tigers offense in all four categories.

One of the reasons for Todd’s success is the play of the Tigers offense line.

“We knew they could be really physical, but we didn’t know how quickly they could grow up,” Glisson said. “We are playing with a bunch of juniors and two sophomores so we worried about the experience factor, but we knew they had talent.”

Despite only hauling in one catch for 16 yards and one carry for 14 yards last week, Qua Moss still figures to be a major part of the Tigers offense as their leading receiver. Four star safety Noah Dixon flashed his offensive potential by catching three passes for 23 yards and a touchdown last week.

The Tigers continue to see the emergence of Logan Sinkfield, who started the game in the backfield and registered 18 rushing yards and two catches for 52 yards and a receiving touchdown against Starr’s Mill.

Troup will be riding a five game win streak into the game as they are 5-0 and 2-0 in region play as the halfway mark of the season.

The Tigers game against Riverdale was originally scheduled for Friday will now kickoff at 5 p.m in Callaway Stadium due to inclement weather.