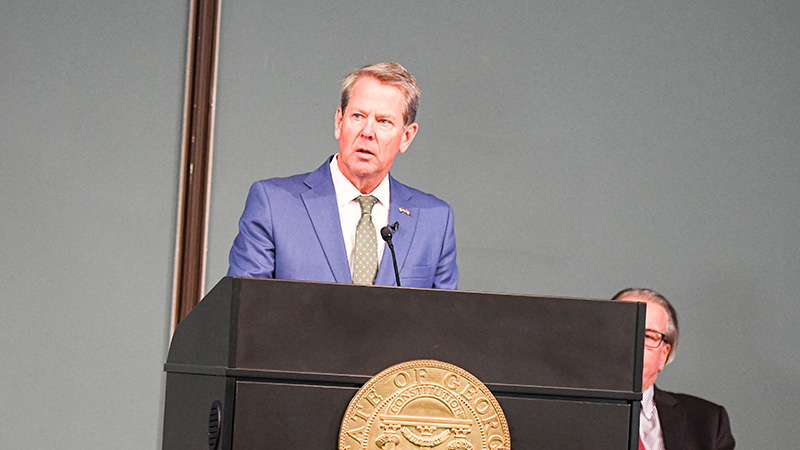 On Tuesday afternoon, we received an email from the governor’s office, saying that Gov. Brian Kemp would be at Kia Georgia in West Point on Wednesday for a major economic announcement.

We see the governor a couple of times a year here in Troup County, but the spontaneity of the news and the location sent our newsroom into overdrive. What could it be? Speculation, as you could’ve guessed, ran wild. We don’t report speculation, but we certainly wanted to be prepared for any of the possibilities, especially when you consider the location of the announcement, so we started trying to find anything we could. Had we missed something?

On Wednesday, the crowd was a who’s who of Georgia politics. Secretary of State Brad Raffensperger was there. Representatives from the Georgia Municipal Association were there. Local leaders from the city of LaGrange, West Point and Troup County were in the audience. CEOs from Bridgestone Golf and WC Bradley, both Georgia companies, spoke.

We’d asked some local leaders if they had any idea what Kemp was going to say. They all told us no. No one knew. We were all in the dark, and the governor had a captive audience.

And that’s when the leader of our state took the stage and announced that Area Development magazine had named Georgia the best state to do business for the ninth year in a row.

And with no disrespect to the governor, our initial reaction was “is that it?”

It was like a kid keeping the best-looking present for last at their birthday party only to open the box and find a new pair of socks.

With no disrespect to the honor from Area Development magazine (I’ll circle back to it momentarily), it’s not exactly groundbreaking news. It’s not the kind of thing where every media outlet you can name from Atlanta and Columbus would make the hour-long trek to Troup County. Nor would you get every leader imaginable to show up.

In fact, Area Development actually announced the news three weeks earlier on Sept. 8. Kemp said during his speech that no one had really recognized it, and he wanted to bring attention to it, so his office organized Wednesday’s press conference.

Like any good politician, Kemp has his go-to phrases. For the last five years or so, one of his go-to lines has been Georgia being named the best state to do business, always in reference to Area Development magazine. We’ve never heard him leave it out of a local speech. However, we can’t recall him ever putting together a spectacle as he did on Wednesday at Kia.

It’s amazing what happens when early voting is just a few weeks from getting underway.

I agree it’s a huge honor for Georgia to be ranked number one, especially nine years in a row. That shows the work of economic development leaders around our state. Area Development surveys site selectors, so people in the industry who really know what they are doing, and Georgia was No. 1 or No. 2 in almost all 13 metrics. That’s unbelievable.

Kemp rightfully credited everyone involved for the work they do, as he absolutely should. He also recognized former governors Nathan Deal and Sonny Perdue for the work they did in setting him and the state up for success. Kia was also the perfect location to highlight, given what it’s meant for Georgia’s economy.

But we should recognize that Area Development is just one ranking of “the best states to do business.” Celebrating it like it’s the end all, be all is like UCF celebrating a national championship in football in 2017 after the Colley Matrix ranked the Knights No. 1 in the country.

CNBC has Georgia as the No. 10 best state to do business. Forbes has Georgia No. 6 and U.S. News has Georgia No. 9 in the latest rankings we can find for both magazines. All of those are impressive rankings, even if they aren’t number one, and it shows that we’re obviously doing something right.

It’s also impossible to ignore that while Kemp was speaking, Hurricane Ian was making landfall in Florida, with a future track forecasted to include southeast Georgia counties. (The storm continues to move east, so as I type this, the Georgia forecast keeps improving.)

To the governor’s credit, he did give several updates on Ian Wednesday, including one at Kia, and toured the state’s emergency operations center before the speech. But it’s hard to ignore state leadership being hundreds of miles away celebrating a three-week-old announcement while there might be a statewide emergency elsewhere. Maybe reschedule for a day when there’s no threat of a hurricane making landfall in the state?

Kemp held a campaign rally at Del’avant Event Center before speaking at Kia. That event had everything you’d expect from a campaign fundraiser. There were no “Kemp for governor” signs at the Kia event since it was official business, but the mission of his re-election campaign was implied throughout the speech and all the kind words about the job he is doing.

We’re always happy to welcome the governor to Troup County, but we certainly hope his next visit that includes leaders from all around the state will actually be to make a major economic development announcement, one that will improve the lives of the residents of LaGrange, Hogansville, West Point and Troup County as a whole.