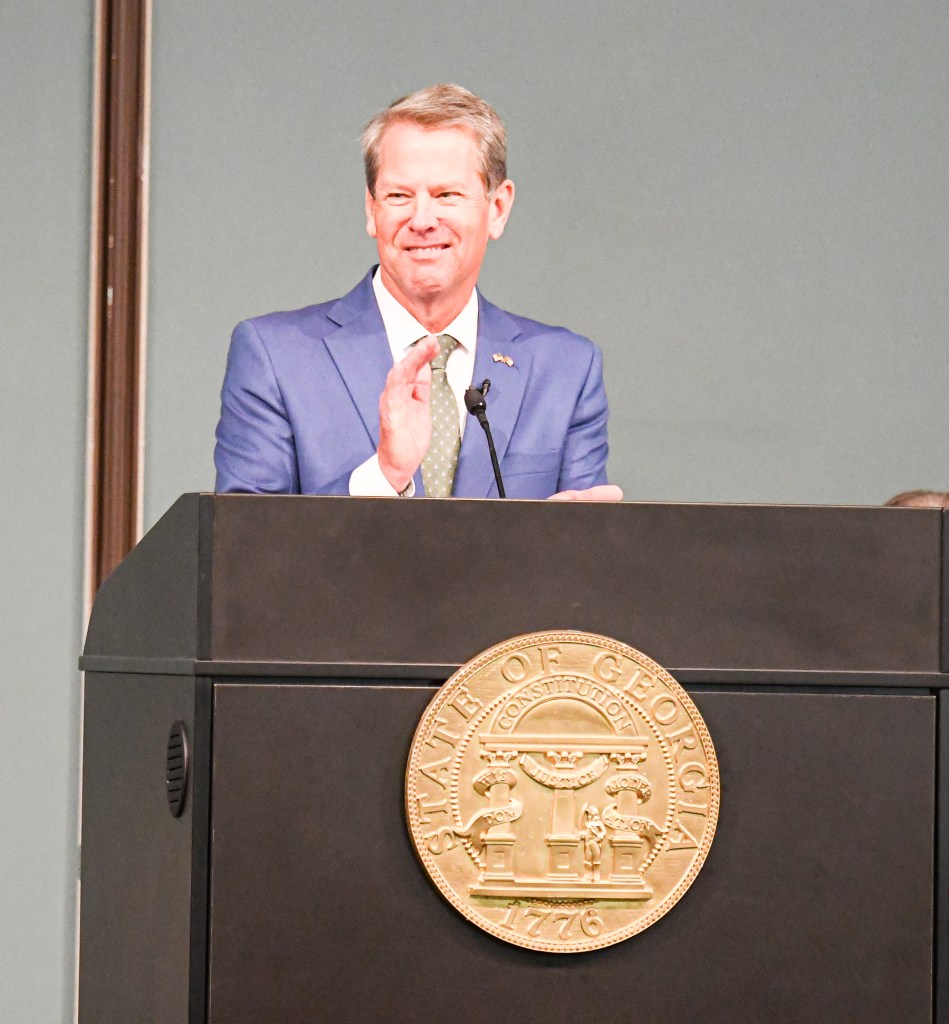 After making a quick campaign stop in LaGrange at Del’avant, Gov. Brian Kemp travelled to the Kia Training Center in West Point to make what was billed as a major announcement regarding the state’s economy.

The governor was joined by countless local and state leaders, as well as economic developers and company executives from across the state in the nearly packed auditorium of the facility.

During the event, Kemp announced that Georgia was named the No. 1 state for business for by Area Development magazine for the ninth consecutive year.

Georgia’s near decade-streak as the top state for business is unprecedented during the magazine’s 57-year history.

The governor chose Kia as the venue to make the announcement due to the manufacturing plant’s importance to the state and local economy.

“Kia has been a valued partner and employer in our state for decades now,” Kemp said. “We chose to make this announcement here at this facility to help underscore really how much value that these types of partnerships have and what and how they have led to literally generational job creation now.”

Kemp said that their partnership approach, conservative leadership and dedication to saving both lives and livelihoods during the pandemic helped the state win the award for the ninth year in a row.

Countess thanked Kemp for his leadership, advising that Kia Georgia was able to grow while many states were shutting down manufacturing during the pandemic.

“Because of the resilience of Georgia citizens, we did not slow during the pandemic that shuttered much of the rest of the nation. While the leadership of other states stood idle, hoping for a better turn, Gov. Brian Kemp and his administration has both hands on the steering wheel, guiding our state through an extremely and exceedingly challenging time.” Countess said.

Kia Georgia has grown though out the entirety of the nine years Georgia has been Area Development magazine’s top state for business.

“Kia continues to grow and increase its role in the U.S. market. We started out producing one car in in 2009. This year, almost 50 percent of the KIA products sold in the U.S. will come from this Georgia facility,” he said.

“Thanks to our world-class infrastructure, award-winning workforce training programs, pro-business environment, and most of all our hardworking Georgians, the Peach State is a national leader in the assets job creators look for when deciding where to start, grow, and sustain a thriving business,” he said.

“It’s no surprise that Georgia is ranked No. 1 for the ninth year in a row by experienced location consultants,” said Geraldine Gambale, Editor of Area Development. “State and local economic developers in Georgia have consistently worked together to guide companies through the location process and retain their business for years to come.”

Kemp noted that the Georgia was actually named the top state for a few weeks.

“Although we’re announcing it today, this news is not really a secret. In fact, Area Development published the state rankings three weeks ago,” said Kemp, noting he held the event because the news of Georgia’s win wasn’t widely known.

“Area Development isn’t targeted for the masses. Don’t get me wrong, It’s a great publication. After today, it might be my favorite,” Kemp joked. “But it’s meant for a specific audience and that is why it’s viewed so reliably by that audience.”